B-ko (Voice of Emi Shinohara), furious over A-ko (Voice of Miki Ito) constantly wrecking her attack mechas with her superhuman strength, doubles down and reveals that she has created a strength enhancing (albieit ridiculously revealing) power suit that allows her to actually match her hated rival in hand to hand combat. In the battle that ensues throughout the school, B-ko clearly seems to have an advantage over A-ko, although A-ko holds her own. Sensing that she’ll be blamed for the school’s destruction, however, A-ko attempts to lead B-ko away into the city to avoid further reprimanding.

Meanwhile, the city is having problems of its own, namely the invasion of the mysterious alien space station who have finally arrived, looking for their lost princess. It becomes a battle royale as A-ko and B-ko continue their violent, destructive spat by using the military defense force and the alien’s mechanical invasion robots. The battle comes to a halt when C-ko (Voice of Michie Tomizawa), the immature and annoying girl the two had been fighting over, arrives with some of C-ko’s flunkies in an absurd flying machine. However, suddenly C-ko is plucked from the air by one of the alien’s jets flown by the mysterious alien Spy D (Voice of Tessho Genda). Revealing that she is in fact the missing Princess! (Not A-ko, as was earlier implied.) Seeing this, A-ko and B-ko form a temporary truce to rescue her.

Using B-ko’s battlesuit jetpack, the girls sneak aboard the spaceship and get seperated. A-ko manages to be sneak attacked by D, who is now in a battle bikini, revealing the unpleasant fact that he is actually a woman who looks and sounds like a man. The two then get into a swordfight. B-ko, meanwhile, manages to find C-ko and attempts to get off the ship with her while trying to tolerate her whining and crying over A-ko. A-ko manages to be victorious in the battle with D and kicks her headfirst through a wall which leads to the bridge, starltling the alchoholic alien Captain (Voice of Shuichi Ikeda), who then attempts to shoot A-ko with a laser, but is overcome by a severe attack of the D.T.’s due to running out of booze earlier. B-ko and C-ko find their way on board and the battle between A-ko and B-ko resumes, with B-ko firing missles everywhere. D revives and joins the battle, firing a pistol at B-ko and the Captain goes crazy with a machine gun, accidentally disabling the ship’s control panel, and sending the massive craft careening towards Earth, where it is impaled on the command tower (which was made from the ship C-ko crash landed in at the beginning), and a peice of the ship lands right in front of the school. As A-ko’s put-upon teacher looks outside in horror, A-ko nervously apologizes for being late yet again.

The next morning, A-ko and C-ko, now dressed in her new uniforms, leave for school again, outside the school, the now stranded Captain and D are panhandling for funds, and B-ko is once again waiting by the entrance gate with a villainous smile, implying that she intends to attack A-ko yet 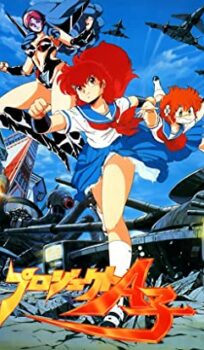