On the day of the prom, Mary Lou (Lisa Schrage) takes full possession of Vicki’s (Wendy Lyon) body, and lets it be known to Bill (Michael Ironside) that she’s back. That night, he digs up her grave to see if she was truly dead, and he finds Father Cooper’s (Richard Monette) body in her coffin. He then goes to the school, armed with a gun.

Shortly after Mary-as-Vicki is announced as prom queen, Bill shoots her in the back a few times. Then, his son Craig (Justin Louis) arrives, and after he demands for someone to call an ambulance, Mary’s rotted corpse crawls out of Vicki’s body. She starts tearing apart the whole room as she reforms herself, and then she begins to beat up and terrorize Craig. Shortly before she can send Craig into the trunk that housed her soul, Bill shows up with her prom crown. He gives it to her and they kiss. Her grave then explodes, and it shows her and Bill back in 1957, dancing at the prom. He had apparently went into the trunk with her. Shortly after the trunk closes, Craig hears Vicki’s voice, and he opens it to find Vicki alive and well.

When Vicki and Craig step outside, they suprisingly are met by Bill. He loads them into his car, but it soon becomes clear that Mary Lou has taken possession of him, and as they scream, he drives off with them into the night. 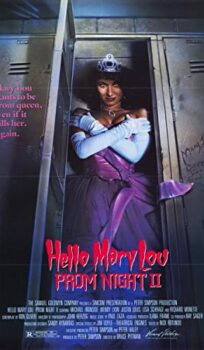