Rob (Robert Foxworth) and Maggie (Talia Shire) eventually discover that Isely (Richard A. Dysart) has spent the last 20 years treating the timber in his mill with methylmercury, since it a cheap fungicide, but the methylmercury has been getting into the river through the mill’s runoff all of that time and contaminated the fish and other aquatic life, which in turn has contaminated whatever has been eating them. That is why both the Native Americans and the wildlife have been suffering various health problems, why both have been giving birth to stillborn or deformed offspring, and why the wildlife has been mutating to unnatural sizes. This news causes Maggie to quietly panic, because – unbeknownst to Rob – she is pregnant herself and has eaten the fish. Rob decides that he must procure evidence by taking blood samples from the Natives.

While doing so the next day at the Natives’ village with help from Hawks (Armand Assante) and Ramona (Victoria Racimo), Isely appears with Sheriff Pilgrim (Charles H. Gray) and other officers intending to bring the Natives in for questioning over the murder of a family of campers up at Mary’s Bend the night before (perpetrated by Katahdin). When Hawks’ name is called first, he deduces that they consider him their prime suspect and thus flees into the woods. Rob asks Ramona to show him where Mary’s Bend is, and they and Maggie are flown there by Muldoon (Tom McFadden) in his helicopter. They land just as heavy rain and winds begin to kick up, and while examining the campsite, Hawks suddenly shows up. Soon after, Maggie finds Katahdin’s two mutant cubs – one alive and one dead – stuck in a salmon poacher’s net and alerts Rob, Hawks, and Ramona to them. Knowing that they will serve as solid evidence of the harm Isely’s mill is causing, Rob has both cubs wrapped up in his and Hawks’ coats, and they, Maggie, and Ramona return to the chopper. However, they find Muldoon tying the rotors together, and he says that the weather has gotten too bad for them to fly out. Since the living cub needs to be kept alive and the Native village is too far to walk to, the group decides to make the much shorter walk to the home of Ramona’s grandfather, Hector (George Clutesi).

They arrive to find a few Natives hanging around and no sign of Hector. They set about trying to keep the cub warm and stable in one of the tents, and Rob then orders Hawks and the other Natives to get someone from the local newspaper to come here, as well as Isely and Pilgrim. Later, after Hawks and company return and the cub is stabilized, Maggie talks to Rob outside and reveals her pregnancy to him, but expresses how terrified she is at the prospect of giving birth to a mutant yet she doesn’t wish to abort the fetus. Moments later, Isely and Pilgrim arrive along with some of Isely’s men, and Hawks hides in the underground tunnels below the tents. Rob shows Isely the bear cub and informs him that the methylmercury from his mill caused its condition, which shakes Isely to his core. After stepping outside, Rob asks him if he knew about what his mill was doing, and he replies that he didn’t want to know. Hector then returns, but Katahdin emerges seconds later, looking for its cubs. The beast slaughters Isely’s men as well as the Natives, grievously injures Muldoon, and spills some oil that catches fire and burns down Hector’s entire home as well as the car Isely and his group came in. Rob, Maggie, Hawks, Ramona, Muldoon, Isely, and Pilgrim hide in the tunnels to wait for the bear to leave (Hector stays above ground and out of Katahdin’s field of sight), but Pilgrim is killed by it when he sticks his head above ground to check if it has gone following a period of silence. Katahdin then takes the dead cub and departs.

The next morning, the repentant Isely heads to a microwave tower at the top of Mount Emery to call for help while the rest carry Muldoon and the living cub to the Native village to get shelter there until said help arrives. Unfortunately, shortly after Isely reaches the peak, Katahdin kills him in a surprise attack. The others arrive at the village and find it devoid of people, and later, Hawks locates a loggers’ carrier truck parked close by, so they decide to drive into town with it. Sometime after nightfall, Katahdin ambushes them while they are still making their journey and flips the truck onto its side, and the cub starts to bite Maggie. Everyone runs into the woods while Katahdin finishes off Muldoon, and they run until they reach the lake and see Rob and Maggie’s cabin on the other side of it. They swim towards it, but Hector stays behind to confront Katahdin, believing that he can talk to and reason with it since he is the tribe’s elder. Katahdin immediately kills him, however, and Rob drowns the cub when it won’t stop harming Maggie. The beast then swims after the others and manages to reach the other side of the lake shortly after they do, so they go into the cabin and barricade themselves inside.

Katahdin smashes its way in, and Maggie and Ramona both get knocked out by flying debris. Rob shoots it twice with a shotgun with little effect, and Hawks fires a few arrows into it, but Katahdin kills him with a mighty swat. Rob takes up the bow and tries to ready an arrow, but Katahdin hoists him up to deliver a bearhug. Rob stabs it in the head repeatedly with the arrow until it lets go of him and then falls into the water. After seeing that the creature is still hanging on to life, Rob leaps onto it and stabs it in the neck several more times with the arrow until it finally dies and sinks to the bottom of the lake.

Rob and Maggie get on the next flight out of the wilderness, but as the camera follows their plane from the ground, another mutated bear suddenly springs up and roars…. 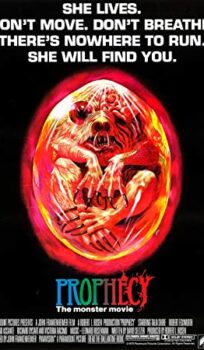