Short, quick version:
Nobody survives.  Everyone gets either infected or killed.

Longer, detailed version:
An old lady living inside the building, only known as Mrs. Espinoza, sets off the horrific chain of events when she attacks and bites one of the Police officers; from then on, tension escalates, and horror and mayhem ensues as the building is condemned, locking everyone inside it, power and all sorts of communication are disconnected, and the infection propagates as each of the people trapped in the building, as in a domino effect, are bitten and infected one at a time -including the two CDC guys who are sent to investigate the origins of the problem-.  Particularly, little Briana (Joey King) shows signs of the disease without being beaten, because her dog Max, which got previously taken to the Vet, was already infected.

Towards the end of the movie, Angela (Jennifer Carpenter) and her cameraman Scott (Steve Harris) are the only ones who make it to the top appartment, where the mysterious, not-heard-of-in-months tenant should be, and chased by infected Officer Wilensky (Columbus Short).  They manage to lock themselves in the appartment, and tumble around the dark place, using the camera light to guide them.  They come upon several cages to keep animals for experiments, and paper cuts suggesting the idea that this was all a terrorist act taken into effect by some Apocalyptic cult.  Unfortunately, they come upon the infected tenant and Scott turns the light off and puts the night vision to try to avoid him; of course, with no luck: the man attacks and eats Scott, and the last shot of the film is of Angela crawling in the dark towards the camera before being dragged away, screaming, to her death by the infected man. 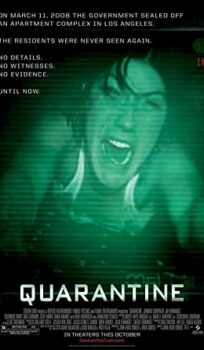