Scientists receive a message from outer space, that an alien race is sending a messenger to earth.  The spaceship with the messenger crashes on Mars.  Earth sends a rescue ship.  They find a green skinned humanoid female (Florence Marly), who refuses any food.

The queen kills Grant (Dennis Hopper) and sucks his blood.  While some consider her a barbaric monster, the commander insists that it is no different than us eating meat.  He decides they will take turns donating blood to keep her alive until the return to earth.  She is able to escape her bonds, and kills other crew.  She can hypnotize men into letting her drain their blood.  The one female on board, Judi (Laura James) is immune to her mind control.  Judi fights the queen.  The queen bleeds to death from a scratch, and they realize she had no clotting factors in her blood.

Only Judi and Brenner (John Saxon) are alive.  As they reach earth, they realize the queen left eggs hidden all over the ship.  She was not a messenger.  She was like a queen bee, on a mission to start a new colony, feeding off earth.  They plead with the head scientist (Basil Rathbone) to incinerate the ship and destroy all the eggs.  He insists that the eggs are too valuable for study.  As the head scientist takes a tray of the vibrating eggs off the ship,  there is the clear implication that chaos is coming. 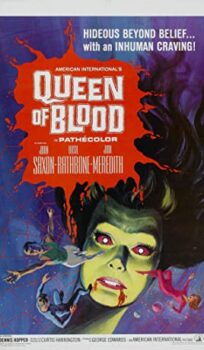