After the cannibalistic Wagabu overrun their cave, the Ulam retreat to a swamp, but the source-fire that the Ulam carry with them in a small receptacle goes out during the retreat.

Since the Ulam do not know how to create fire (“atra”), Naoh (Everett McGill), Amoukar (Ron Perlman, in his film debut) and Gaw (Nameer El-Kadi), are sent out by their tribal elder to find it.

The trio survive being treed by a pair of sabre-toothed lions and mange to steal some fire from a tribe of Wagabu that are about to cook and eat Ika (Rae Dawn Chong, also in her film debut), a member of the more advanced Ivaka tribe. Gaw and Amoukar create a diversion to lure most of the Wagabu away from the campfire, while Naoh kills the remaining two Wagabu. During the fight, Naoh is bitten on the genitalia by one of the Wagabu.

Ika follows the trio and after relieving Naoh’s pain by applying some cool moss to his damaged organ, is allowed to accompany them. The quartet manages to finally get away from the Wagabu that are pursuing them to retrieve the “atra” when Naoh befriends a group of woolly mammoths that wander onto the scene as the Wagabu are about to attack. The mammoths charge the Wagabu and drive them off.

Around the campfire that night, Naoh anally rapes Ika because he hasn’t quite figured out intercourse yet. Ika soon leaves to return to her own tribe and a heartbroken Naoh attempts to track her down with Gaw, Amoukar and the “atra” in tow.

Naoh eventually finds the Ivaka village, but almost sinks in the swamp surrounding it, until Ika convinces her fellow tribesmen to save him. Naoh is eventually accepted into the tribe and an Ivaka tribesman demonstrates to him how to make fire.

When Amoukar and Gaw get caught in the same swamp, they are also rescued by the Ivaka. That night, Amoukar knocks out Naoh and Amoukar, carrying the unconscious Naoh, and Gaw, carrying the “atra” receptacle, flee the village. Ika follows them and the four survive an encounter with an upset mama grizzly bear, though Gaw is badly mauled and use some stolen Ivaka spear-throwing tools to kill some rival Ulam tribesmen who attempt to steal the “atra” receptacle and take credit for returning it. Along the way, Ika teaches Naoh the proper technique for productive mating.

The four return with “atra” to the remaining Ulam left in the swamp. But as they all celebrate, one of the Ulam falls in the water while holding the receptacle! Everyone is downcast as Naoh tries to make fire and fails, but Ika makes the “atra” to re-light the receptacle and there was much rejoicing.

We see later that the Ulam have returned to their original encampment, where Amoukar is telling the story of their journey around a roaring campfire, other tribe members are practicing the technique to make fire and Ika is pregnant with Naoh’s child.

This is the best caveman movie you will ever see with an Anthony Burgess-developed language and wonderful acting, costumes, make-up, music and cinematography. 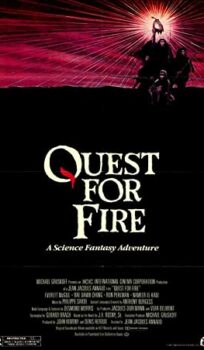