Herb Stempel (John Turturro) testifies before Congress, and reveals the ways in which “Twenty-One” producer Dan Enright (David Paymer) coached the contestants and rigged the outcomes of the games.

With his father by his side, Charlie Van Doren (Ralph Fiennes) admits before Congress that he took part in a fraud. He is disgraced, and loses both his post as a professor at Columbia University and his spot on the “Today” show. He must leave the public eye forever, eventually becoming an editor for the Encyclopedia Britannica.

Dick Goodwin (Rob Morrow) is disappointed to find that Charlie Van Doren is becoming the public fall guy for the scandal. Goodwin had hoped the Congressional hearings would implicate top executives at NBC and Geritol, but that doesn’t happen. Geritol’s president (played by Martin Scorsese) and the network brass all swear before Congress that they had no idea “Twenty-One” wasn’t on the level (even though earlier scenes in the movie suggest that the cheating was largely THEIR idea). Goodwin tries to persuade producer Dan Enright to testify against the Geritol and NBC execs, but Enright chooses to take the blame himself, rather than alienate important people he may need to work with again.

Soon, there are no quiz shows left in prime time television. But eventually, Dan Enright and host Jack Barry create the daytime game show “Joker’s Wild,” which makes them rich and successful again.

Goodwin, who later became a speechwriter and advisor to President John Kennedy, looks back on this scandal as the beginning of a sea of corruption that would run rampant through big business, the media, and American culture as a whole. 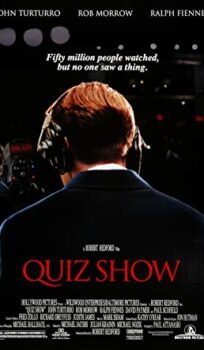