Jake LaMotta (Robert De Niro) is a boxer from the Bronx managed by his brother Joey (Joe Pesci). Despite setbacks with his weight he is headed for a title shot. His first wife leaves and he begins a relationship with a 15 year old girl named Vicki (Cathy Moriarty) who he eventually marries and has children with. Becoming increasingly paranoid, LaMotta believes that his brother is having an affair with his wife and attacks him. His brother leaves him. LaMotta loses his title to Sugar Ray Robinson and retires to become a night club owner and stand up comic. His wife leaves him and takes the children. He goes to jail for abetting statutory rape. LaMotta resolves to change and apologizes to his brother. 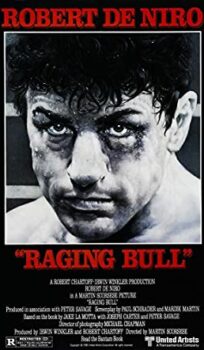