Woodcutter’s first story: he was walking in the woods when he saw a woman’s hat, and then a dead man with sword in his stomach.

Bandit’s story: he saw the husband and wife travelling through the woods and he became aroused by the wife, so he stalked them and tied the man to a tree. He then forced himself on the wife but the sex ended up being consensual. The wife then urged a duel between the men, saying she’d take off with the winner. After the bandit and the husband have crossed swords “23 times” the bandit finally wins, but the wife has run away.

Wife’s story: she was raped by the bandit, and afterwards when she turned to her husband for comfort, he stared at her so coldly and with such contempt and hate that she begged him to kill her with a dagger. He continued staring at her, and out of rage she stabbed him, then fainted.

Husband’s story (told through a medium): his wife was raped, he was tied to a tree, and he felt so shamed he killed himself.

Woodcutter’s second story: he witnessed the whole thing. The wife was raped by the bandit, and the husband reacted cruelly, saying, “Why don’t you kill yourself?” The wife goes unhinged and starts laughing wildly and challenges the bandit and her husband to be “real men” and fight. After a messy, protracted battle, the bandit finally puts a sword in the man’s stomach.

Back to real time: the Commoner points out that the dagger, which was described as “pearl lined” is missing, thus implying that the Woodcutter stole the dagger and sold it for money. The priest, Commoner, and Woodcutter find an abandoned baby by the gates. The Woodcutter takes the abandoned baby home, as he says he has six children and “one more won’t matter.”

The viewer is left to decide which story was true. 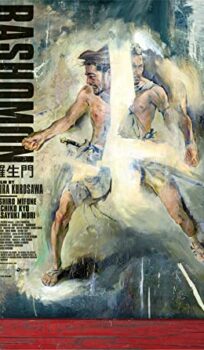