Ray Charles’ (Jamie Foxx’s) new manager Joe Adams (Harry Lennix) reveals that his former manager Jeff (Clifton Powell) had been cheating him out of large amounts of money. The two have a bitter breakup. Marge (Regina King)dies of a drug overdose, and Ray goes into rehab. While there, he has a dream where he is back home in Florida, outside his mother’s (Sharon Warren’s) house, and he can see. His mother tells him that he can recover and continue to do great things. Then his younger brother George walks out of the house and tells Ray that his drowning was not his fault. Ray then went on to become one of the most acclaimed musicians of all time. In 1979, the state of Georgia offered a public apology for banning Ray from performing there due to a segregation dispute many years earlier. Ray Charles died in 2004 of liver failure, shortly after the movie’s production wrapped.
Thanks, Herbmeistr, who adds, “I strongly encourage anyone who reads it to go see the movie as this was the kind of movie that is NOT about what happens in the end.” 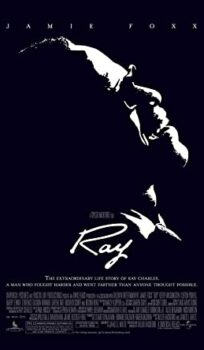