Submitted by Ryan and Evan B

After all hell breaks loose, the only ones left alive are reporter Angela (Manuela Velasco) and her cameraman, Pablo (never seen but voiced by Pep Sais).

They manage to take refuge in supposed abandoned penthouse apartment… only to discover that the apartment is where the source of the virus came from (A girl believed to be possessed was studied in this room and the conclusion was that it was a new strain of virus).

The light for the camera is broken when Pablo uses it to scout a crawlspace in the ceiling, only to discover one of the creatures hiding up in it.

Using only the nightvision, both Pablo and Angela discover the girl was was the original source of the infection is still in the apartment. Before they can flee blindly through the darkened apartment, Pablo is killed and drops the camera. Stumbling to escape, Angela grabs the camera and flees, only to trip and fall in the hallway outside the apartment. Through the lens of the camera, you see Angela get dragged back into the pitch black apartment and is presumably killed.

Order of Deaths:
Most of these people who are infected are not killed after becoming infected. It is assumed that all those in the building are fatally infected except for Pablo and Ángela.

Though the film ends with Ángela being dragged into the darkness by Medeiros, it is revealed in Rec 2 that she was not killed. 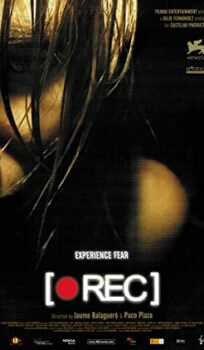