Throughout the movie, actual, though unidentified, witnesses to Reed and Bryant’s lives are shown remembering the two and the times. These are incredibly interesting, charming, and moving testimonials. Beatty didn’t identify the speakers in the movie because a) he didn’t want to create a separate “documentary” feeling to the interviews (which often contradict each other politically and in regard to “facts” of the time), and b) he didn’t want the famous to overshadow the less so (e.g.Henry Miller is one of the witnesses).

After his experience at the Soviet revolution, Reed (Beatty) becomes even more deeply involved in Left politics in the USA, eventually leading a breakaway from the Socialist party. He leaves the USA to seek Comintern recognition of his breakaway party but fails, in turn rejecting Soviet orders to stay on working for them. Reed then attempts to leave the USSR but is apprehended and imprisoned by the Finns.

Following his release back into the USSR, he still cannot leave for the US and becomes involved in Soviet propaganda, becoming increasingly disenchanted with their suppression of dissent (depicted by his clashes with a party apparatchik played with incredible vividness by novelist Jerzy Kozinski). Started with the aid of her one-time lover Eugene O’Neill (a very subdued but intense Jack Nicholson) and enduring an extraordinarily difficult passage through the Allied-blockade into the USSR, Bryant (Keaton) finally reaches Reed in Petrograd. The iconic image on the poster is from this moment. Their reunion is short-lived, however, as he dies from typhus shortly thereafter. 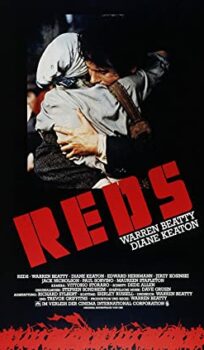