Dwight Arno (Mark Ruffalo) accidentally kills Ethan Learner’s (Joaquin Phoenix) son with his car. Arno intends to turn himself in, but before he does he makes a video for his own son, apologizing and telling him that the past few weeks they’ve spent together have been the best of his life. Arno doesn’t turn himself in and the cops tell him the case is closed, they have no further leads. One night at a piano recital at school Learner recognizes Arno as the driver of the car that killed his son.

Learner buys a revolver, kidnaps Arno and takes him to the beach where he intends on killing him. They fight, wrestle for the gun, and Arno (Ruffalo) gets it. He puts the gun to his own head and tells Learner (Phoenix) to tell him to kill himself and he will do it. Learner goes home crying without saying a word. At the end of the movie we see Arno’s son watching the video of his dad apologizing. It is assumed that Arno turned himself in, because we saw him throw the gun in the ocean. 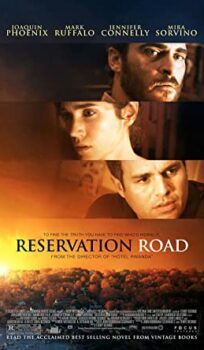