SHORT VERSION:
Trevor and Kat eventually realize that they do love each other and become a couple. Danny achieves his goal of becoming strong enough to take a punch, and at the end of the film, he hosts a party for a local sorority (chiefly to try to secure a date with one of the gals), with Trevor and Kat in attendance.

LONG VERSION:
Though Kat (Cobie Smulders) spends an evening relaxing with Danny (Kevin Corrigan) and even makes out with him, she decides to drop him as a client a couple of nights later after he attempts to wine and dine her at his mansion under the pretense of a workout session. As she leaves, he tells her that he does want to date her, but she calls him an insecure person who can’t trust anything he can’t buy and also calls him the worst rich guy ever because he doesn’t know what to do with his money. She then goes to meet with Trevor (Guy Pearce) back at the gym, and after Trevor informs her that Danny left a message saying he has stopped payment on his cheque, Kat tells him about Danny’s inappropriate behavior towards her. He calls Danny and warns him to not contact Kat again lest he face legal action and even threatens to harm him himself.

The next night, Trevor pays Danny a visit and reams him for what he did and even roughs him up a little, but the fight in him soon dies down and he opts to just leave without any further fuss, and Danny tells him before shutting the door that he is giving up on improving his physique. Moments later, Trevor tells Danny through the door that he doesn’t want him to quit on his goal to become strong enough to take a punch, and Danny ends up inviting him inside to smoke some weed with him, and they become friends in the days that follow. Trevor also becomes Danny’s new trainer, and Danny buys a 50% ownership stake in Trevor’s soon-to-open new gym. However, one day, Kat visits Trevor at his house and tells him that she is quitting his employ, and as they talk about it, she states that she wants to get physical with him and hints that they had done it before. However, Trevor tells her that, while he does care about her, he just can’t do that, so she leaves annoyed.

While Trevor and Danny are getting drunk together with their lawyer Paul (Giovanni Ribisi) at Danny’s mansion one night, a week before the launch of the new gym, Trevor invites Danny to come to Marfa with him tomorrow since he is going to meet his fitness idol Grigory Volkov (Anthony Michael Hall) there. Danny refuses, saying that he will be returning to New York that day to try to reconcile with his ex-wife Christine (Elizabeth Berridge). They then get to talking about Kat, and Trevor reveals to him that he has romantic feelings for her and they had an affair when she first came to work for him, but they put an end to it for professional reasons and he claims to have no desire to get into that situation again. Unsettled by this news, Danny heads upstairs to get some time alone. When Trevor later comes up and finds him trying to do exercises drunk, Danny brings up how Trevor said he loved Kat, and asks him if she has ever returned his love before telling him to not throw a potential relationship like theirs away. He then orders Trevor out of his home. The next morning, Trevor comes by to speak with Danny, but Paul emerges from the mansion instead, and when they go grab a bite to eat, Trevor becomes incensed after Paul informs him that Danny has decided to put his ownership stake up for sale.

While driving out to Marfa later on, Trevor gets a surprise call from Kat. After chatting for a bit, Kat tells him that Danny is offering her his stake in the gym at a cheap price, and Trevor encourages her to take it and promises to pay her back twenty-fold while also asking her semi-seriously to come to his meeting with Grigory. Trevor later calls Danny while he is sitting at the airport awaiting his flight to New York, and he tells Danny that he is angry with him, but Danny replies that he is “training” him and orders him to tell Kat he loves her, then hangs up.

While having dinner with Grigory and his wife Erin (Brooklyn Decker), Trevor asks him to come do a guest seminar at his new gym, but Grigory turns him down. However, when Trevor leaves, he sees Kat parked in her car nearby, due to having just been pulled over by a cop for speeding. She and Trevor go back into Grigory’s house to try to persuade him together to make an appearance, but things devolve into an argument between them that culminates with Trevor admitting to Kat that he has a longing for her. When they leave later, they believe that they have failed to change Grigory’s mind, but Erin emerges from the house and basically tells them that Grigory is interested in doing business with them. Trevor tells Kat that he will write her a check for $3,000 when they return to Austin and hopes they can move on as friends. Kat asks if he really thinks that will work, and he answers that he thinks it will work how they want it to work, or they can just let Danny pull the strings and give him what he wants because the wealthy client is always right. Kat then asks what Danny wanted, but he doesn’t answer her.

Meanwhile, Danny has dinner with Christine, but his reconciliation attempt ends in failure. After Kat later texts a picture of herself drinking a beer in her car to Danny and asks what she is doing in the photo, he calls her and asks if he would have ever had a shot with her if he wasn’t a client. She tells him to answer her question first, and he replies that Trevor can tell her what this is all about. Kat answers his question with “no”. As she tries to give him suggestions on ideal girls to pursue (including going to a sorority), Trevor walks up to her car, and after realizing that she is talking to Danny, he has her hand over the phone to him. As Kat says that Danny told her that he (Trevor) was supposed to tell her something, Trevor tells Danny that he feels betrayed, but Danny tells him that he and his wife split up again for good. While Trevor and Kat are giving him more advice on how to best approach a new relationship, Danny is suddenly punched in the gut by a mentally unhinged stranger. However, he takes it pretty well, and he realizes he achieved his goal. Trevor and Kat then spend the night together in Trevor’s rented trailer, but sleeping in separate beds, and in the morning, they leave separately for their morning runs. However, when they cross paths, Trevor changes his path and follows her, and once he catches up to her, he kisses her, and they go back to the trailer and have sex.

While having breakfast at a diner one morning, they get into another argument about their personal and business relationships, and Trevor ends up finally confessing his love to her. When they leave, Kat again asks Trevor what Danny wanted him to tell her. Trevor again refuses to provide an answer, but she nonetheless returns his love, and they kiss. We then see Danny paying a random visit to a sorority house, where he tells them that he is a multimillionaire and says that he wants to throw a party at his house in their honor as a gesture of thanks since they do a lot of community service. The movie ends with the party in full swing at Danny’s mansion, and Trevor, Kat, and Paul are in attendance. 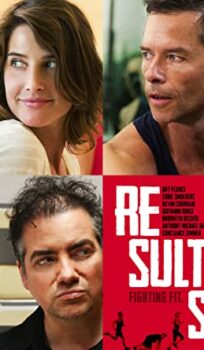