Long Ending:
This film takes place in the world of 1980s pop/rock/metal (the costumes and hair are glorious), and the setting is Louisville, Kentucky.  Freddy (Thom Matthews) is a newly-hired employee for a medical supplies company that stores and sells all manner of corpses to medical research facilities. His manager, Frank (James Karen), tells him that George Romero’s Night of the Living Dead is based on an actual event that was covered up by the military. When Frank doubts Freddy’s claims, Freddy takes him to the basement where they are keeping corpses contained in military drums. He explains that the drums with the corpses were delivered to them by accident. While looking at the corpses through a glass window in the lid, Frank accidentally breaks open the drum and a gas leaks out. Frank and Freddy are knocked unconscious while the gas spreads throughout the building.

Meanwhile, Freddy’s girlfriend Tina (Beverly Randolph) drives with her friends Suicide, Spider (Miguel A. Núñez Jr), Trash (Linnea Quigley), Chuck, Casey, and Scuz to wait for Freddy to get off of work. They decide to wait in a nearby cemetery. Trash talks about her fears of being eaten alive before stripping naked and dancing for the group (and remains nude the rest of the film).

Freddy and Frank awaken and notice that the zombie in the military drum has melted and disappeared. They quickly learn that the gas has brought everything dead back to life (including dead animal cadavers). Fortunately, there is only one corpse currently in the building, and it is locked in the freezer.  Freddy wants to call the police or the military (there is a number for the military on the side of the drum), but Frank convinces him to instead call the owner, Burt (Clu Gulager).  Burt arrives and the three capture the one animated human corpse. They stab it in the head, but it has no effect. They decapitate the corpse and cut it to pieces, but each piece of the corpse continues to move on its own. Nothing seems to affect the corpse or kill it again. They carry the corpse to the nearby mortuary owned by Ernie (Don Calfa), an ex-Nazi. He agrees to burn the dismembered corpse (and all other reanimated cadavers) in his cremation furnace. After this is done, Freddy and Frank collapse from illness and Ernie calls some paramedics. As the corpse burns, the smoke from the furnace containing the reanimating chemicals billows up into the air. Meanwhile, Tina enters the medical supply company to look for Freddy.

It begins to rain and the chemicals burned up in the furnace mix with the rain water to create acid rain. The other teens run into the medical supply building while outside, the bodies in the cemetery are exposed to the chemicals in the rain and begin to reanimate and claw their way out of their graves. The teens find Tina in the basement where she is being attacked by the corpse that escaped from the military drum. It is shown that the zombies are intelligent, can talk (usually saying the word “braaaiiins”) and are hungry. The zombie captures and eats Suicide’s brains while the others escape and flee the building. They get separated as they flee. Eventually, Chuck and Casey circle back into the medical supply building, Trash’s brains are eaten in the cemetery (fulfilling her worst fear) and her body sinks into the mud, and Scuz, Tina, and Spider make it to the mortuary. The medics are on-site and though Freddy and Frank are still conscious and talking, they are physically dead.

The medics go out to their ambulance to radio for help, but are eaten by a horde of the living dead (who then use the radio to ask for more medics to be sent on site). The people in the mortuary watch as each time police or medics arrive, they are ambushed by the zombies and quickly killed. The dead attempt to break in through the mortuary’s windows, but everyone acts quickly to barricade the place. Scuz is killed in this endeavor. The group captures a corpse and Ernie interrogates it. The corpse reveals that the living dead are in pain because they can feel themselves rotting. It also tells the group that eating brains is the only thing that makes them feel better. The police eventually figure out that something fishy is occurring in the area and cordon it off.

Eventually, Freddy succumbs to his undead hunger and tries to eat Tina’s brains (saying its her duty as his girlfriend to feed him). The others block Freddy in a seaprate room. Frank commits suicide by burning himself to ashes in the furnace rather than succumb to the hunger. Meanwhile, Trash’s corpse is reanimated thanks to the chemicals in the mud. Reanimated as a hot and naked woman, she is able to approach the police cordon, seduce the police and townspeople, and eat their brains. Accordingly, the zombie scourge spreads even quicker. Spider and Burt make a successful run to an abandoned car and try to drive and get help, but are deterred by the zombies and crash into the medical supply center, where they meet a still-hiding Chuck and Casey. They finally make themselves to a working phone in the basement after incapacitating the zombie hiding down there and call the military for help. Meanwhile, Freddy breaks out of his bonds and begins stalking Tina and Ernie through the mortuary.

The military confirms that Burt’s phone call is real and that the living dead are in Louisville. The general calls for a near-nuclear strike on Louisville. The bomb hits just as Freddy breaks into the room Ernie and Tina were barricaded in. The entire area, and humans and zombies alike, is vaporized. We then hear the general on a phone call telling his superiors the problem has been taken care of. As the general congratulates everyone involved, we watch as the smoke from the bomb strike mixes with the rain of the still-raging storm, and more dead begin to rise. 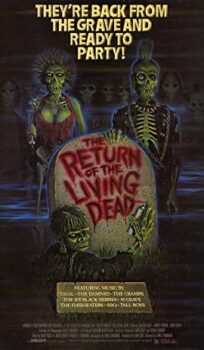