Alan (Michael Gibney) is a loser attending Camp Manabe.  He’s a jerk, but also the victim of numerous pranks, including one where his stepbrother, Michael, skins his beloved pet frog and uses it to scare two girls from the camp — blaming it on Alan.

People begin to suspect Alan in the disappearances/deaths at Camp Manabe when he vanishes after a particularly brutal prank instigated by his crush, Karen (Erin Broderick), and the death count begins to rise faster.  Ronnie (Paul DeAngelo, of the original Sleepaway Camp) still thinks that Angela (the murderer throughout the series) is to blame, but helps to organize a search for Alan after Angela’s cousin, Ricky (Jonathan Tierston, also from the original film) arrives to help out.

Michael finds Alan first and, thinking he’s the killer, savagely beats him with a croquet mallet.  Suddenly, someone grabs Michael from behind and we hear him scream.  Not long after, Ronnie and Ricky stumble upon Alan, who is still alive but only barely conscious.  He points to the pushes and says the name “Michael” just as Sheriff Jerry startles everyone by arriving on the scene and removing his disguise — Angela has been the culprit all along!!  She gives a brief speech about campers not being able to behave and it is revealed that she has skinned Michael and left him to die, because he thought it was funny to do that to a poor, helpless frog.  Ricky, who had defended his cousin, cries out her name in shock and Angela laughs maniacally at the camera, just like she did at the end of the first film.  Fade out.

It was really obvious that the Sheriff was actually a woman the whole movie, so the real shock about the ending is that the actress playing Angela is not Pamela Springsteen, who took the role in the two previous sequels, but Felissa Rose, the actress who originated the role (hence the homage to the first film’s conclusion).

After the credits, we see Angela up to her old antics again, tricking a police officer into helping her on the side of the road with a flat tire and then crushing him under the car by removing the jack. 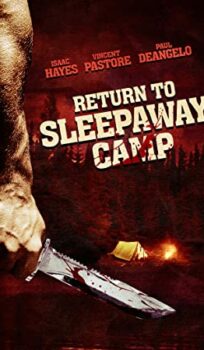