Frank (Leonardo DiCaprio) and April (Kate Winslet) are a married couple, who are not satisfied with living a “hopelessly empty” suburban life. They spontaneously decide to move to Paris and start a new life.

However, April finds out she is pregnant with the couple’s third child, and Frank eventually decides to stay in the security of their current life (especially after he finds out that April was going to abort the child, so they can go to Paris).

One evening, after a disastrous dinner party involving family friend, and realtor, Helen (Katy Bates) and her mentally sick son John (Michael Shannon), Frank and April have a huge fight, in which April says that she hates Frank and Frank replies that if that was true, that he wished that she just aborted the child.

The next morning, all seems “normal” again as April makes breakfast for Frank, expresses interest in his job, and tells his that she doesn’t really hate him. However, after he leaves for work, she goes into the washroom to perform the abortion on herself, even though it was past the period where it was safe to do so. The abortion attempt is botched and April is sent to the hospital, where she dies.

Frank takes his kids and moves to the city, while a new young couple moves into their house on Revolutionary Road. 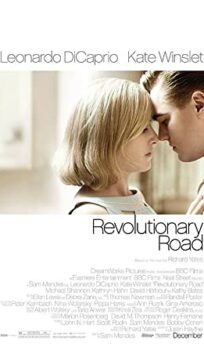