POOPER
FBI Agent Tom Shaw and Atlanta Journal-Constitution reporter Kathy Scruggs separately determine that Richard Jewell couldn’t have planted the Centennial Park bomb then make the 911 call. After learning that the FBI has no actual evidence against him, Richard stops showing reverence to law enforcement and refuses to cooperate any further. 3 months later, the FBI officially end their investigation of Richard, and the real bomber is caught 6 years later. Richard Jewell died in 2007. Watson and Nadya finally get married, and Richard’s mother Bobi babysits their sons.

LONG VERSION
In 1996, former police officer Richard Jewell (Paul Walter Hauser) is a security guard at Piedmont College. He is fired by the school’s president because Richard has a history of getting into altercations with the students. Unemployed and nearly broke, Richard moves in with his mother Bobi (Kathy Bates). Richard’s friend Dave Dutchess (Niko Nicotera) tells him that he can easily get a security job in nearby Atlanta due to the Olympics coming that summer, just like he did. Richard is quickly hired and is assigned to work at Centennial Park, where concerts will be held there nightly. Meanwhile, FBI agent Tom Shaw (Jon Hamm), of the Atlanta Division, is also assigned to work Centennial Park, as is Atlanta Journal-Constitution reporter Kathy Scruggs (Olivia Wilde), who reluctantly accepts the assignment even though she is a crime reporter. In the early morning hours of July 27, Richard, who is working despite having a stomach ailment, spots an unattended backpack under a park bench. While he is bringing this to the attention of the Atlanta police, a man at a nearby payphone calls 911 and tells the operator that there is a bomb in Centennial Park that will explode in 30 minutes. The police arrive, see that there is a bomb in the backpack, and order the area evacuated. The police, Richard, Dave, and even Agent Shaw assist the other security guards in getting everyone to clear the area, but the bomb explodes before the bomb squad arrives. Many people are injured, and two people killed, but everyone is quick to hail Richard as a hero for his actions.

With the news of the explosion, as well as Richard’s actions, spreading around the world, Agent Shaw and his partner Dan Bennet (Ian Gomez) begin their investigation. They are soon contacted by the president of the college Richard was fired from. He tells the agents that he suspects Richard is the bomber because he always wanted to be a hero. They soon begin to investigate Richard, painting him as someone who creates terror in order to appear as a hero. While this is happening, Richard is receiving multiple interview requests and even a book deal, so he contacts his old boss Watson Bryant (Sam Rockwell), a lawyer who Richard worked for before he became a cop, to help with the book deal contract. One night, Kathy meets Agent Shaw at a bar, and after she offers sex in exchange for a scoop about the bombing, Shaw tells her that the hero security guard is the prime suspect in the bombing. The next day, Kathy writes the story for the AJ-C and convinces her editor to print it. Within hours, the story is front-page news and it’s being repeated across CNN and other media outlets. At this time, Agents Shaw and Bennet ask Richard to assist them in their investigation, but they are really trying to trick him into waiving his Miranda rights and confess to the bombing. Richard instead asks for his lawyer, and he calls Watson. He tells Richard that the FBI thinks he is the bomber, and he is to not say another word and leave now.

Richard goes home to his apartment and finds it swarming with media, all asking if he is the bomber. A few hours later, Watson arrives at the apartment. He asks Richard if he’s the bomber, and Richard says he’s not. Watson also tells him that from now on, only he is to do the talking. That night, Watson and his assistant/girlfriend Nadya (Nina Arianda) head to Centennial Park, where they time the distance from the bombing site to the payphone, and they determine that there is no way Richard could have planted the bomb then make the 911 call. Meanwhile, as the media watches from a distance, the FBI raid Bobi and Richard’s apartment. They seize his hunting rifles and crime novels, and even Bobi’s Tupperware containers and pantyhose. Despite Watson’s order, Richard continues to talk to the FBI and even assists them in their search. Watson and Richard step outside, and he tells Richard to stop “helping” because it’s making things worse for him, but he says that’s difficult for him because he was raised to be respectful and deferential to authority. Later, while Watson is talking to the media, Agents Shaw and Bennet again ask Richard for his assistance. This time it’s to make voice recordings similar to what the bomber said, but again it’s just a trick to get Richard to confess. This angers Watson when he sees what’s happening and makes them stop. As the FBI is leaving, Richard begins to feel chest pains, but he says he’s fine.

Days later, while the FBI is collecting hair samples from Richard, Watson tells Agent Shaw that he timed the route from the park to the payphone, and Richard couldn’t have done it. Agent Shaw says it doesn’t matter, but he later goes to the park to measure the distance and figures out that Watson was right. He and Agent Bennet now think that Richard had to have an accomplice. They then interview Dave, and they accuse him of not only being the accomplice, but also Richard’s gay lover. This news makes Richard finally lose his cool and he takes out his frustration on his mom. He apologizes for yelling at her, and he tells Watson he’s ready to fight back. Watson has Richard take a lie detector test, and he passes it. Watson then takes the results to the AJ-C and confronts Kathy, accusing her of ruining Richard’s life and demanding a retraction, but she stands by her story. However, she wonders if Watson was right, so she also measures the distance in the park, and she too figures out Richard couldn’t be the bomber. She then meets Agent Shaw at the bar again and tries to convince him that Richard is innocent, but he blows her off, insisting that he is the bomber and Dave was his accomplice. She threatens to report that the FBI’s case against Richard is falling apart, but Agent Shaw cuts her off. He says that she burned him for reporting what he told her that night, and he won’t forget that. Later, Bobi holds a press conference, and she tearfully pleads to the media that Richard is innocent and to leave them alone. Kathy watches it and realizes that she is to blame for what is happening to Richard.

Richard is once again called into the FBI office, and this time Watson goes with him. He answers their questions politely, but after Agent Shaw flat out accuses him of being the bomber, Richard demands to know what evidence they have. When they don’t answer, he tells them that the real bomber is still out there, and he and Watson leave. He tells Watson that he has lost his feeling of reverence to law enforcement, and will no longer cooperate with the FBI any further. Three months later, the FBI announce that they are ending their investigation of Richard, and he is no longer a suspect. Agent Shaw meets with Richard and Watson at a diner, where he presents them with a letter announcing the end of the investigation. However, Shaw tells Watson that he still thinks Richard is the bomber. At the same time, the FBI returns to Bobi everything that was seized, including her Tupperware and Richard’s guns.

6 years later, Richard is now a police officer in Luthersville, Georgia. He is met by Watson, who informs him that a man named Eric Rudolph, who was on the FBI’s Ten Most Wanted list, has been arrested in North Carolina, and he has confessed to being the Centennial Park bomber. A grateful Richard asks to go to his arraignment, so he can see the man who nearly ruined his life. Title cards reveal that Richard died of a heart attack in 2007 at the age of 44. Watson and Nadya are now married, and Bobi babysits their sons every Saturday night. 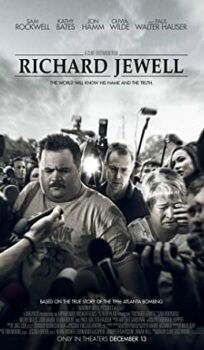