Richard (Edward Herrmann) and Regina (Christine Ebersole) manage to get out a signal indicating that they’re alive, but unfortunately, Van Dough (John Larroquette) and his men get it at the same time that Richie (Macauley Culkin) does on one of his friends’ computers. Van Dough’s men go to their location and apprehend them. Richie, Cadbury (Jonathan Hyde), Diane (Mariangela Pino), and Richie’s friends infiltrate the mansion so Richie can get to his computer in his room, but Richie finds Van Dough in his room with his tied-up parents, and security nabs his friends.

Richard is forced to tell Van Dough that the family vault is in Mount Richmore, so Van Dough takes him and Regina to it. Ferguson (Chelcie Ross) takes Richie and the others to the basement lab to kill them, but Professor Keenbean (Michael McShane) gets the better of him and saves everyone. When the Riches open the vault, Van Dough discovers there is only keepsakes in it. The Riches tell him that their money was in banks, the stock market, and real estate, and these things were in the vault because they treasured these more than money. Angered, Van Dough tries to kill them, but Richie shows up and helps them, and they get outside of Mount Richmore onto the scaffolding with Van Dough in pursuit. Ferguson mans the stone carving laser and tries to kill the Riches, but Cadbury stops him, fights him, and knocks him out. Then, with the laser, Cadbury shoots beneath Van Dough, causing him to fall and get hung upside down by the leg in some rope. Richie fires him, and Regina punches him unconscious.

The movie closes with a baseball game at the Rich residence with Richie and his friends. Richie hits a home run to the cheers of everyone, Cadbury kisses Diane, and Van Dough and Ferguson – now serving jail time – are working as groundskeepers. 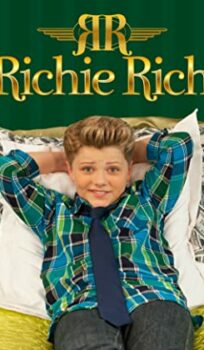