After learning that Vaako (Karl Urban) knows where Riddick’s home world is, Riddick agrees to give up the Necromonger crown in exchange for a trip back to his uncharted home, Furya.  He is betrayed by Urban’s subordinate Krone and left for dead on a desolate planet with huge poisonous scorpions that need to be wet to be active.

Riddick domesticates a wild dog and is surviving until he sees a storm coming that will wake up countless deadly scorpions. He finds a mercenary outpost and activates a beacon so that he can leave before the scorpions become active.

A mercenary crew arrives headed by Santana who announces that he will take Riddick’s head and put it in a box.  A second crew arrives headed by Boss Johns and his female sniper, Dahl.  Johns announces that he does not want the bounty, only to interrogate Riddick.  The two leaders make a “gentleman’s agreement” where the power nodes of the their ships are kept in a locker with an explosive device to keep everyone honest.  Without the right power node, neither ship can fly.

A few of Santana’s men die and Satana is forced to cooperate with Johns.  The words “fair trade” are written on the locker with the power nodes that freaks everyone out.  The locker is nervously inspected.  The power nodes are safe, but are quickly stolen by the stealthy Riddick who buries them in the ground. Riddick then directly confronts the Mercs and Dahl shoots him with tranquilizer darts.  While Riddick is chained, it begins to rain and the monsters come out.  Santana tries to cut Riddick’s head off, but Riddick decapitates Sanatana with some fancy footwork.  The Mercs make a deal and cut Riddick loose.  Riddick, Boss Johns and Diaz (Santana’s number 2) head for the power nodes on hover bikes.  Riddick tells Johns that his son from Pitch Black was a morphine addict and tried to use a girl as bait to escape monsters.  Riddick challenges John to have what his son did not have, a spine.  After the nodes are dug up, Diaz tries to betray them, but Riddick gets him with a sword.  Diaz disables the hover bikes with gun fire before he dies.

Johns and Riddick fight scorpions, but Riddick is disabled by a scorpion sting.  Johns heads for the ship.  Riddick rouses himself, cauterizes his wound and heads for high ground.  Johns gets to his ship, flies back to Riddick, takes down the scorpions with gun fire and sends Dahl to extract him.  Riddick and Johns exchange farewells and fly off in different ships.

In the alternate ending, Riddick returns to the Necromonger flagship and finds Krone praying in front of a window that has a view of a rip in space, the Underverse. Riddick asks Krone where Vaako is and Krone tells him that Vaako is no longer amongst them.   Krone says that Vaako intended to honor the deal that he made with Riddick but Krone did what he did because his faith can not have a leader who is a misbeliever or a kind heart. Riddick kills him and asks a handmaid to answer with one word whether Vaako is alive or dead. She answers “both”. Riddick then looks at the Underverse and we hear Vaako say the word “Transcendence”. 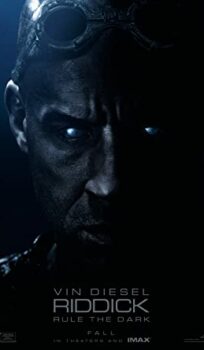