According to IMDB, Randolph Scott retired from acting after this movie, because he said he could never make a better movie.

Aging lawman Steve Judd is hired to transport gold from a mine to town.  He runs into an old friend from long ago, Gil Westrum (Randolph Scott).  Judd hires Westrum, and Westrum’s young sidekick Heck Longtree, as additional guards.

Elsa (Mariette Hartley) is a young lady who came to the mining camp to marry her boyfriend, Billy Hammond.  She is shocked at how coarse and vulgar Billy and his 4 brothers are. It appears they expect her to be a communal wife shared by the 5 of them.  Judd, Westrum and Longtree reluctantly agree to bring her back to safety in town.

Westrum and Longtree were planning on stealing the gold from Judd.  However, Longtree is impressed with Judd’s decency and wisdom in dealing with Elsa’s situation.  Longtree is in love with Elsa. When Westrum turns on Judd, Longtree sides with Judd, preventing the theft.  They continue, with Westrum as a prisoner now. 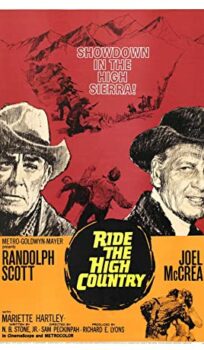