Longer Ending:
While attempting to develop a cure for alzheimer’s disease, Will Rodman (James Franco) tests a new virus to counteract alzheimer’s disease on apes provided by his company Gen-Sis. After a disastrous presentation to the board members, the project is ended, but Will spares the life of a young ape who was born to one of the test apes and brings the ape home. Will continues his research on the ape, who his dad names Caesar, and the two develop a loving relationship. As Caesar grows, Will takes him across the Golden Gate Bridge to the Redwood forest to roam free. Unfortunately, the drug Will created does not have permanent effects on the test subjects. After Caesar violently attacks Will’s neighbor Hunsiker (David Hewlett) when Hunsiker threatens Will’s dad, Will is forced to bring him to an ape preserve where the other apes beat Caesar and the caretakers abuse him.

Caesar realizes he can never live in harmony with the human world and breaks out to steal some of Will’s virus and exposes his fellow ape inmates to the drugs. Caesar begins training them to be obedient to him. Will is forced to test a stronger strain of the virus on other apes with great success, but after a fellow employee named Robert (Tyler Labine) is exposed to it, he dies violently. The virus only works on the apes killing all humans exposed to it. News reports inform us that the Icarus spaceship (housing Charlton Heston’s crew from the original Planet of the Apes) has launched, and is later lost. After killing sadistic ape caretaker Dodge Landon (Tom Felton) in self-defense, sparing the life of sympathetic caretaker Rodney, and realizing he can speak English, Caesar leads the apes out of their prison and destroys Gen-sys, releasing the intelligent apes there as well.

After a confrontation with the police, the apes successfully cross the Golden Gate Bridge and reach the Redwood Forest. Will finds Caesar and begs him to come home. In English, Caesar informs Will that he is home, and with Will’s blessing, he and his fellow apes swing into the great trees.

After the credits we see that Will’s neighbor, Hunsiker, is a pilot. Earlier in the film Robert sneezed on Hunsiker, giving him the fatal virus. As Hunsiker travels the globe, the virus fatal to humans begins to spread. 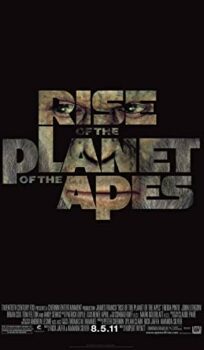