Matt Calder (Robert Mitchum), showgirl Kay (Marilyn Monroe) and Matt’s son Mark (Tommy Rettig) survive the treacherous trip down the river, and make it to town. When they get there, Matt plans to go after Kay’s old flame, the treacherous Harry Weston (Rory Calhoun), who had stolen Matt’s gun and horse.

Kay begs Matt to let her talk to Harry. She hopes she can talk him into apologizing and returning Matt’s property. Matt agrees, and she goes over to the saloon to look for Harry, while Matt and Mark look for items they need at the general store.

When Kay tells Harry that Matt is in town, Harry takes his gun to the store to kill Matt. Before he can do so, young Mark shoots Harry in the back with a rifle he had been eying in the store. At this point, Kay goes back to her job as a showgirl at the saloon, while Mark and Matt go back to their farm.

That night, Matt bursts into the saloon during Kay’s performance. He picks her up and carries her to his wagon, where Mark is waiting for them. Matt announces that they’re taking her “home.” She hugs Mark and drops her fancy shoes on the ground, knowing she won’t need such fancy footwear now that she’s going to be an ordinary farmer’s wife. 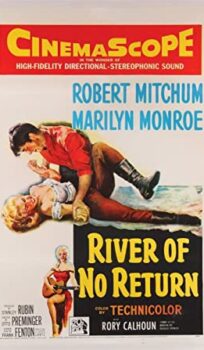