Robin Hood & Little John sneak into Prince John’s castle, freeing the condemned-to-die Friar Tuck and the other residents of Nottingham from the dungeon. Robin then enters Prince John’s bedroom and proceeds to rob him of all the money stored in there, which is given to the long-suffering Nottingham residents.

Little John then begins to lead the people out of the castle. However, their cover is blown when Prince John?s lackey Sir Hiss notices the last of the money being lowered to the dungeon and tries to stop it, waking Prince John and in turn causing him to alert the guards. Robin & Little John keep the guards busy while Friar Tuck gets the Nottingham residents safely on board a wagon. As Little John takes off with the wagon, one of the children is shown being accidentally left behind, so Robin goes back to get her. He rushes for the gate, but it is closed on him. After he gets the child out to Little John, Robin evades the weapons of Prince John’s soldiers and gets back to Prince John’s bedroom, but the Sheriff of Nottingham follows him and soon sets the room and the whole top of the tower on fire. Robin escapes to the roof and then does a long jump down into the castle’s moat. Arrows pierce through the water as Robin submerges himself, and soon Robin’s hat surfaces with an arrow through it, leading Little John and Prince John to believe him dead. However, Robin surfaces unscathed and escapes, and an angered Prince John takes his anger out on Sir Hiss.

King Richard returns from the Crusades not long afterward, and pardons Robin and Little John. He also has Prince John, Sir Hiss, the Sheriff, and the guards Trigger & Nutsy imprisoned. Robin and Marien get married, with all the Nottingham residents and King Richard in attendance. The newlyweds leave in a carriage, with Little John as the coachman and Skippy the rabbit along for the ride, saying to his friends before he left that if Robin & Marien ever had kids, he would be the one to look out for them. They ride off into the sunset. 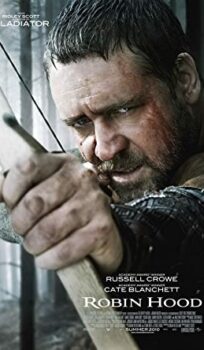