The entire Detroit police force quits the OCP after refusing to help their Rehab Squad forcibly evict people in Cadillac Heights from their homes. They then go to Cadillac Heights and deputize their resistance movement, and they prepare to battle the combined forces of the Rehab Squad and the Cyber Punks. RoboCop (Robert John Burke) fights and destroys one of the Otomo robots (Bruce Locke) in the resistance’s headquarters, and Dr. Lazarus (Jill Hennessy) – with help from Nikko (Remy Ryan) and her computer – sends out an illegal broadcast to everyone in Detroit telling them about the OCP’s and Rehab Squad’s vile acts and encourages them to rally against them both.

RoboCop, wearing his new flight pack, comes to the aid of the resistance and single-handedly wipes out the Rehab Squad & Cyber Punks. He then goes to the OCP building to get revenge on McDaggett (John Castle) for killing Officer Lewis (Nancy Allen), and arrives there shortly after the OCP goes bankrupt. He finds himself battling two more Otomo robots, and they get the upper hand on him, but before they can destroy him, Nikko and Dr. Lazarus reprogram them to destroy each other. McDaggett then informs them that these robots were equipped with a self-destruct sequence, which activates upon their destruction. RoboCop incapacitates McDaggett by burning his ankles with the flight pack’s jets, and then he collects Nikko and Dr. Lazarus and flies away just as the Otomo robots explode, taking out McDaggett as well as the entire top of the building.

Shortly after RoboCop lands in the street, Kanemitsu (Mako) arrives, and he tells the OCP CEO (Rip Torn) that he’s fired. He then respectfully bows to RoboCop. 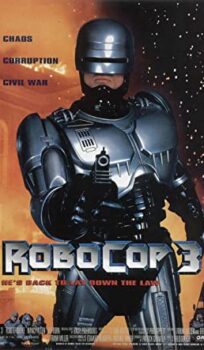