After realizing that Sherrie didn’t sleep with Stacee, and finding her stolen records, Drew (Diego Boneta) and Sherrie (Julianne Hough) get back together.

Stacee (Tom Cruise) realizes that his manager has been controlling him and stealing money, so he fires Keith Gill (Paul Giamatti) and winds up with the reporter, Constance (Malin Akerman).

Drew winds up as Stacee’s new songwriter (after he has been “writing” Don’t Stop Believing over the movie).

Dennis (Alec Baldwin) and Lonny (Russell Brand) wind up as a couple and The Bourbon Room is saved as Stacee returns the money Keith stole.

Patricia Whitmore (Catherine Zeta-Jones), after trying to shut down the Strip, is revealed as having been a former groupie of Stacee and she gives up her efforts. 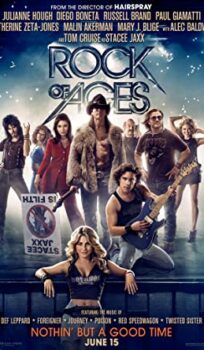