Pooper:
Most of the customers make it to the shore safely. Pete is separated from the group and stumbles upon the crocodile’s lair. He kills the crocodile and rescues a still-barely-living Kate. Pete carries Kate to a rescue crew that was looking for them and is reunited with the other survivors.

Long Ending:
Pete (Michael Vartan) is an employee for a travel company sent to review a small town in the Australian outback. He signs up for a crocodile tour captained by Kate (Radha Mitchell) and her dog. He is joined by a squabbling couple, parents with their young daughter, an older man whose wife recently passed away, and two other individuals. While on the tour, they see a distress flare from a spot outside the tour route and decide to investigate. While searching for the people who shot the flare, a gigantic crocodile smashes their boat and the customers are stranded on an island in the middle of the river. The crocodile manages to eat the husband (part of the squabbling couple) and most of the supplies from the boat are lost.

Later, a motorboat piloted by a local named Neil (Sam Worthington) and his friend, who harassed Kate and the tour group earlier, track them down. The crocodile also capsizes their boat and drags Neil’s friend to its lair. It soon becomes apparent that when the tide comes in, the island will be submerged underwater. While the crocodile swims off to store Neil’s friend in its lair, Neil swims from the island to the shore and strings up a rope between trees from the island to the shore that the other customers can crawl across to safety. The customers panic, however, and too many of them get on the rope at the same time. This causes one of the trees securing the rope to collapse (plunging several customers into the water) and in the ensuing chaos, Neil and the father of the young girl are eaten by the crocodile.

The customers eventually make a giant fishing line using a thick rope, a giant hook they recovered from the ship, and baiting it with two birds Neil and his friend hunted in the beginning of the film. They hope to hook the crocodile long enough for everyone to swim across. Pete offers to go last so that he can help anchor the rope as long as possible (and Kate leaves her dog with Pete). The plan works and the other customers and Kate begin swimming for the shore. The crocodile eventually breaks free from the hook and chomps down on Kate, dragging her to its lair. Pete tells the other customers to run as he and the dog swim across. He is unable to find them when he and the dog make it to shore.

Pete follows Kate’s dog into a cave system that turns out to be the crocodile’s lair. Therein, he finds the mangled corpse of Neil’s friend and a severely injured but miraculously still-living Kate. Before he can react, the crocodile returns to its lair and eats Kate’s dog while Pete hides. Eventually, Pete has no other option for escape but to grab a sturdy stick and fight the massive crocodile. Although the crocodile bites off one of Pete’s hands, it can’t deliver a killing blow due to being constrained by its massive size within the cave. Ultimately, the crocodile lunges at Pete who props his splintered stick against the cave wall. The crocodile lands on the stick, which punctures the roof of its mouth and exits its skull. Having fatally impaled the crocodile, Pete carries Kate out of the lair.

Once outside, he spots a rescue party and manages to stumble to their base with Kate. They find the other boat tour customers there receiving treatment as well. Kate smiles at Pete as she is airlifted to a hospital. The film ends with a close-up of an article detailing Pete’s victory over the crocodile surrounded by varied accounts of crocodiles in the region devouring hapless victims. 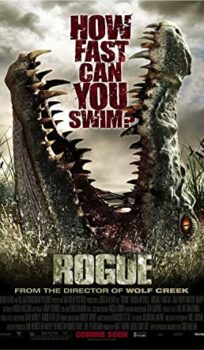