In the 70s in Mexico, Cleo (Yalitza Aparicio) is a live-in maid to a wealthy family with four kids. It becomes clear that the father, Antonio (Fernando Grediaga), has left the family for another woman and Sofia (Marina de Tavira), the mother, is pretending to the children like he’s coming back any day.

Meanwhile, Cleo becomes pregnant by her boyfriend Fermin, but when she tells him he abandons her. When she later tracks him down, he threatens her and says the baby isn’t his.

Eventually, Cleo has a stillborn baby. Sofia takes Cleo and the kids on a weekend vacation where she tells the children the truth, they are sad, but Sofia promises things will be okay. The next day Cleo saves two of the children from drowning, and they are incredibly grateful, but she admits she feels guilty for never having wanted the baby. The family returns home, now with Antonio’s things gone, and adjusts to their new way of life together. 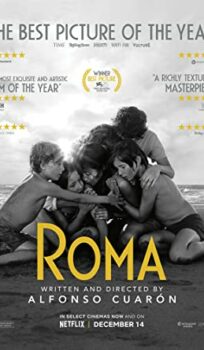