Joe Bradley (Gregory Peck) figures out “Anya” is Princess Ann (Audrey Hepburn) early on but doesn’t tell her he’s a reporter. Joe does not give up the story or the photos of the princess during her fun, exciting day in Rome after she escapes from her handlers, forgoing a big paycheck and losing a bet to his editor. The official story is that she was ill but she was actually all over Rome, on a scooter, dancing at the dock, and escaped her secret service detail.

Princess Ann sees Joe at her last European press conference before going home and realizes he’s a reporter, but the way he phrases a question he tells her he is keeping her secret.

Photographer Irving Radovich (Eddie Albert) gives the princess an envelope with the incriminating photos when the princess walks down the media line shaking hands. Smiles and longing looks are exchanged between Joe and Ann. She walks out of the press conference followed by her entourage, he hesitates pensively in the hallway and walks out the opposite direction, no last-minute goodbyes. 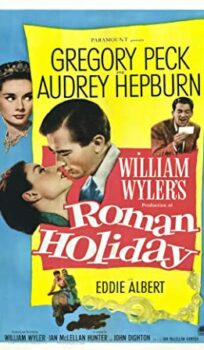