SHORT VERSION:
One night, some days after Cindy weds Conrad in a marriage of convenience, Cindy returns to her apartment and discovers it ransacked and her $25,000 in savings stolen. A few days after that, while she is massaging her favorite client, Justin, she confesses to him that she is working in Canada illegally. This prompts Justin to reveal that he is an immigration officer, and he starts to make the arrangements to send her back to her homeland because, whether she weds someone here or not, she can’t work without her papers. Around the same time, Betty finds some proof that Conrad was the one who robbed Cindy. After confronting him about it, she swears revenge on him (he stole Cindy’s savings because she had originally promised to give him all of it after their marriage, but she later – to his anger – altered their arrangement to paying him in monthly installments because she wanted to send some money to her family).

After Cindy notifies Betty and Lea about her impending deportation, the parlor’s owner, Lawrence – who was alerted to the situation – comes in to discuss the whole issue with Conrad. After Lawrence voices his fear that the authorities are closing in on him and how he regrets not selling the massage parlor when he earlier had a chance to, Conrad takes this opportunity to use Cindy’s money to buy the parlor from him, which was his plan from the beginning.

A day or two later, Betty and Lea visit Cindy at the immigration office and inform her that Conrad was the one who stole her money and he has used it to purchase the parlor, and Cindy tells them that she discovered that Conrad had secretly annulled their marriage. Betty tells them both that she has come up with a plan to make him pay, and to that end, she and Lea later call the police and falsely claim that Conrad has been forcing them to perform full-service jobs on the clientele. The cops come to the parlor and interrogate the women and Conrad separately, and the women repeat their earlier claim to them and also add that Conrad regularly subjects them to abusive and neglectful acts. The cops believe them and take Conrad into custody. Meanwhile, while Cindy is waiting with Justin at the airport for her flight home, he excuses himself to use the restroom, and after he goes, she notices that he has left her a passport in her name on his chair. She takes it and runs off, and Justin watches her go from afar and smiles.

LONG VERSION:
One day, Conrad (Don McKellar) hires a new masseuse, April (Susanne Sutchy), but when they have a private discussion about what her job entails, he encourages her to do a full-service job on him, making out like it is standard procedure. On her very first session with a regular, Larry (Angelo Tsarouchas), it does not end well when he complains to Conrad that she tried to do a full-service job on him despite him firmly refusing it. He then leaves the parlor and calls the cops on the way out, which puts the parlor at great risk of being closed permanently, and April then quits. Conrad hurriedly collects Betty (Tara Spencer-Nairn), Lea (Lindy Booth), and Cindy (Kira Clavell) and flees the parlor with them. When Cindy gets back to her apartment, she finds it ransacked and her $25,000 in savings stolen, and after she contacts Conrad and Lea about it, they come over to comfort her. The next morning, the parlor’s owner, Lawrence (Richard Zeppieri) telephones Lea and tells her that he smoothed things over with Larry, so they’re back in business.

While doing business that day, Lea is visited by her ex-boyfriend Henry (Anthony Lemke), who dumped her days earlier, claiming that he was leaving her for an exotic dancer he met and didn’t believe her when she said she was keeping a secret (that being her job) from him, thinking that she wasn’t capable of something like that. After briefly explaining how he found out that she worked here, he says that he understands that she kept him in the dark about this because she was afraid she might lose him, and then confesses that he himself had lied about hooking up with a stripper, so the two of them get back together. Meanwhile, as Betty is calling around looking to buy a massage parlor of her own with money that she has stored away, Cindy comes up to her and accuses her in a roundabout way of being the robber, based on her trying to make this kind of purchase. Betty assures her that she isn’t, but she tells her that she suspects that the robbery was an inside job. She then gets a call from Mike (Michael Carley), her financial advisor and a parlor client, who informs her that some stock she invested in just took a serious drop, so she is now broke. Cindy then gets a visit from Justin (Michael Cram), a regular customer of hers that she is fond of (and he is fond of her as well), and she ends up confessing to him that she is working in Canada illegally.

Around the same time, Conrad is at the front door paying for a pizza he has ordered, and the delivery guy objects to him, giving him a $5 bill that is half upside down as part of the payment, but he ultimately agrees to take it. Betty overhears this and remembers that when Cindy got a mere $5 from a customer who ripped her off, she tore it in half in anger but then taped it back together that very way and kept it as a reminder not to be so stupid. She hurries out of the parlor and retrieves the banknote from the delivery guy, then confronts Conrad in his office and tells him that she has just figured out that he was the one who robbed Cindy (which was true; Cindy originally promised to give him all of her savings up front after they had their marriage of convenience earlier in the film, but she later – to his anger – altered their arrangement to paying him in monthly installments because she wanted to send some money home to her family). She swears revenge on him and leaves.

As Betty is sitting in the staff room with Lea, a crying Cindy comes in and gets her things from her locker, then tells them that Justin turned out to be an immigration officer and he is already making the arrangements to send her back to her homeland. After Lea reminds her that she is married to Conrad, she brings that up to Justin, but he asks her if she is a landed immigrant. She says “no”, and he informs her that she can’t work without her papers, so the marriage doesn’t matter. Lawrence – having been alerted to the situation – then shows up to discuss the whole issue with Conrad, and Conrad tells him that he was going to show him what Justin looked like so he could keep an eye out for him, but he never did. Lawrence worries that the authorities are closing in on him and that he regrets not selling the parlor when he earlier had a chance to, so Conrad takes advantage of his panicked state of mind and uses Cindy’s money to purchase the place from him – which was his plan ever since he started working there (the earlier episode with April was just a way to maneuver himself into a better position to buy the parlor).

A day or two later, Betty and Lea visit Cindy at the immigration office and inform her that Conrad was the one who robbed her and he has used the money to buy the parlor from Lawrence; and Cindy tells them that another immigration officer told her that Conrad had secretly annulled their marriage. Lea remarks that they underestimated Conrad, but Betty tells her that HE underestimated THEM; she has a plan to get even with him for his unscrupulousness. To that end, she and Lea call the police and falsely claim that Conrad has been forcing them to perform full-service jobs on the clientele. The cops thus come to the parlor and question Conrad and the two ladies separately, and the ladies restate their earlier claim to them and also add that Conrad regularly subjects them to abusive and neglectful acts. The cops believe their lies and take Conrad away in handcuffs.

While this happens, Cindy is sitting in the airport with Justin awaiting her flight back to her home country. He apologizes for things having gone down this way, but she tells him that she doesn’t hold it against him because he is just doing his job. She then asks if she will be able to come back, but he replies that that will be almost impossible. She then gives him a box that contains 1,000 paper cranes that she made while in custody, and she explains that if you make that many, your wish can come true. She promises to come back somehow, and she tells Justin that she sees goodness in his heart and will miss him. Justin then leaves, claiming that he needs to use the restroom, and after he goes, Cindy sees that he left a Canadian passport in her name on his chair. Justin watches from a distance with a smile as she takes the passport and runs off.

Betty, Lea, and Cindy become joint owners of the massage parlor, and the movie ends with them having a celebratory party with the regulars. 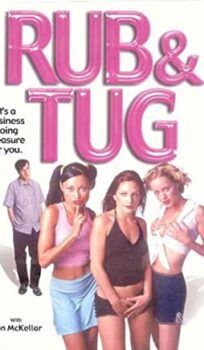