Genevieve is tattooed with the list of the 13 triad heads, including French Ambassador Varden Reynard (Max von Sydow).

Adult Soo Yung (Jingchu Zhang, NOT the same from part 1) is kidnapped by Lee’s brother Kenji (they grew up together in the orphange before Lee was adopted) in exchange for Genevieve.

Lee goes to the Eiffel Tower with Carter dressed as Genevieve. Kenji and Lee have a sword fight that eventually leads them outside onto the scaffolding of the Tower while Lee holds off the thugs. Lee and Kenji eventually are both put in mortal danger, at which point Lee tries to save his brother, but Kenji forces him to let go, and falls to his death. Meanwhile, Carter attempts to save Soo Yung from the Dragon Lady (Youki Kudoh), and manages to kill her (Dragon Lady) as well.

The two send Soo Yung to call the police before getting shot at by the remaining goons, and make good their escape by parachuting from the tower using the French flag. After making a safe landing in a fountain, they are confronted by Ambassador Reynard, who is holding Genevieve hostage
(MAJOR PLOT HOLE as she was needed dead and he obviously had gotten her to himself).

As he is about to shoot Carter, he is fatally shot by cab driver George. Lee and Carter are thanked gracefully by the French Inspector, only to have his thanks returned by getting double-punched, as Lee and Carter dance off into the night. 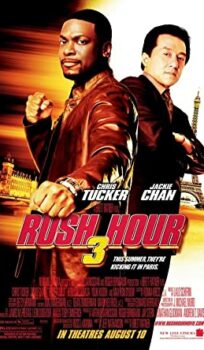