Based on the real life 1951 strike against the Empire Zinc Company in New Mexico.  Many of the roles in the movie were played by the real life miners.

Mexican miners in rural New Mexico go on strike against the mine company.  They are paid less than Anglo miners, and have to work under more dangerous conditions with less safety measures.  Ramon is the leader of the miners. The company tries beating him, arresting him and intimidation.  They try to bring in strike breaking workers, but they are frightened away by the strikers.  Because the strike is on company land, the company gets an injunction to block them.  The miners wives begin picketing, since the injunction does not cover them.  Eventually, the women are jailed.  However, the women are so loud and disruptive in the jail, the sheriff has to release them.  While the women are in jail, the men have to keep house and care for the children.  They gain new respect and understanding towards their wives.  The men add to their strike demands things their wives want (like running water so they don’t have to carry water, and heated homes).

The company does not want to treat the Mexicans like the Anglo miners, since whenever the Anglo miners want something the company can always threaten to replace them with cheaper Mexicans.  The company decides to evict Ramon’s family from the company owned housing.  The miners know they can not do anything as the company is just waiting for an excuse to jail them.  Young boys pelt the eviction team with rocks.  Women block their way, and take furniture and belongings back into the house.  The eviction team gives up.  The company finally caves in and gives in to the miners.  In his final speech to the miners, Ramon shows how much they have come to appreciate the role of their wives in the strike. 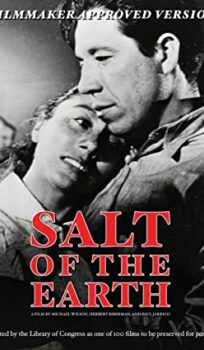