POOPER:
Ray and Emma rescue Blake, Ben, and Ollie from Daniel’s building.  Ray and Emma reconcile, and Blake and Ben appear to start a relationship.

LONG VERSION:
Raymond “Ray” Gaines (Dwayne Johnson) is a Los Angeles Fire Department helicopter pilot, and he and his wife Emma (Carla Gugino) have filed for divorce. Their daughter Mallory drowned, and Ray blames himself for her death, causing the rift between him and Emma.  Lawrence Hayes (Paul Giamatti) is a seismologist at Cal Tech, and he and his partner Kim have traveled to Hoover Dam to test their new earthquake predictor.  There have been a series of small quakes at a previously unknown fault line in Nevada, and their device shows a spike in magnetism just before a quake.  Suddenly, a massive spike occurs, which precedes a magnitude 7.0 earthquake.  The quake destroys the Hoover Dam, and also kills Kim just after he saved the life of a little girl.

Ray and his other daughter Blake (Alexandra Daddario) were planning a trip together to San Francisco when he is called back to work to help rescue survivors of the Nevada quake.  In his place, Emma’s architect boyfriend Daniel (Ioan Gruffudd) has agreed to take her to San Francisco, but he has to attend a meeting while they are there concerning a building under construction that he designed.  Ray isn’t happy about it, and let’s Emma know how he feels about Daniel.  The next day, now in San Francisco, Daniel is at his meeting when Blake meets Ben (Hugo Johnstone-Burt), an English guy who’s in town for a job interview.  Ben brought his younger brother Ollie (Art Parkinson) to tour the city after the interview, and Ollie sees that the two like each other.  He convinces Blake to give Ben her phone number.

Hayes has returned to Cal Tech and is still mourning the death of Kim when a local TV reporter shows up for an interview about the Nevada quake.  He agrees, and he tells her that nobody knew that there was a fault line in Nevada, but he does show that his earthquake predictor works.  His colleagues interrupt the interview to tell him that spikes larger than the Nevada ones are popping up all along the San Andreas fault.  Hayes determines that the Nevada fault intersects the San Andreas, and that massive earthquakes will occur all along the fault.  At that time, Emma is in downtown Los Angeles having lunch with Daniel’s sister Susan (Kylie Minogue).  The lunch is interrupted by Ray’s call to Emma to apologize for his behavior.  Just then, a massive earthquake hits Los Angeles.  Ray, still on the phone with Emma, tells her to go to the roof of the building she is in and he will fly his helicopter to rescue her.  Emma tries to get Susan to follow her to the roof, but she falls through the floor to her death.  Emma is able to get to the roof, and with skyscrapers collapsing all around, Ray flies in and rescues Emma.

Back in San Francisco, Daniel has finished his meeting and he and Blake are driving through an underground garage when the shockwave of the Los Angeles quake hits.  The garage partially collapses, causing their car to crash, pinning Blake inside.  Daniel goes to get help, but as he is speaking to a security guard, a piece of the building crushes the guard to death.  A panicked Daniel then flees the area, abandoning Blake.  Fortunately, Ben and Ollie heard Daniel’s calls for help, and they go to the garage and rescue Blake before the garage completely collapses.  The trio make their way to a nearby electronics shop, where they find a working land line and she calls her father.  Ray, still in the helicopter with Emma, tells Blake to go to Coit Tower and he will find her.  Ray then tells Emma that they are going to San Francisco to rescue their daughter.

Over Bakersfield, the helicopter malfunctions, causing Ray and Emma to crash into a mall.  They steal the truck of a guy looting the mall and continue to head north.  Soon, they pass an elderly couple who yell at them to stop.  Ray and Emma soon see why:  the quake took out the road and it’s impassable.  Ray sees the old man is a pilot, and they agree to swap the truck for his skydiving plane at the nearby airport.  After taking off, Ray and Emma hash out what is happening between them.  Emma never blamed Ray for Mallory’s death, but because he continues to blame himself, she feels she needs to divorce him.  Now over San Francisco, they find the airport runways unusable for landing, so they skydive into the baseball stadium.  At the same time, Blake, Ben, and Ollie discover that Coit Tower is surrounded by flames, so they decide to go to Nob Hill instead since it’s the highest point in the city.  Meanwhile, Hayes and the reporter go on the air to warn everyone that an even bigger earthquake is about to hit the San Francisco Bay Area, and everyone there needs to evacuate immediately.

Just as Ray and Emma are exiting the stadium, the earthquake hits.  They warn everyone nearby to get along the side of the stadium just as the light towers begin collapsing.  The stadium is heavily damaged, but everyone there survived.  Blake, Ben, and Ollie were walking along a street when the quake hit, and Ben is badly injured by falling glass from a nearby house.  Despite his wounds, they continue to travel to Nob Hill.  As a result of the quake, Ray and Emma realize they can’t reach Coit Tower on foot, so they take a boat from a nearby harbor and plan to sail around the city.  They soon see the flames around the tower, and Ray quickly figures that Blake would travel to the highest ground.  Just then, alarms sound because a tsunami is approaching.  Ray and Emma travel up the wave, narrowly avoiding a cargo ship, and are safe.  That cargo ship flips upward, causing it to crash into the Golden Gate Bridge.  Daniel, who happening to be on the bridge at that time, is killed by a falling ship’s container, while everyone else on the bridge is killed when it collapses.  Blake, Ben, and Ollie also hear the alarm, and quickly realize they won’t make it to Nob Hill in time.  Since they happen to be near the building that Daniel is helping build, they run towards it.  They want to go to the roof, but they are only a few floors up when the tsunami wave hits.

With the city now partially under water, Ray and Emma are traveling the streets by boat in search of their daughter.  Incredibly, they find her, but she got separated from Ben and Ollie and is trapped underwater.  Ray goes into the building and dives down to save her, but she drowns.  With the building about to collapse, Emma drives the boat into the building and rescues Ben and Ollie, and also picks up Ray, who is frantically giving CPR to Blake.  He does not want to lose both of his daughters to drowning.  Just as it appears that Blake may be dead, she coughs up water and starts breathing again.  The group of five make their way to Marin County, where relief camps are set up.  As they group is drying off, they look out on what’s left of San Francisco, and see a large American flag unfurled on the remnants of the Golden Gate Bridge.  Ray and Emma appear to have reconciled their differences, while Blake and Ben, still recovering from his injuries, look to be starting a relationship.  The movie ends with a zoom out to show the entire Bay Area, and we can see the earthquake has radically changed the landscape of the area. 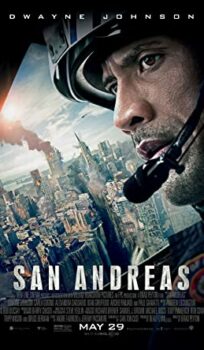