The food at Shopwell’s think the gods (shoppers) are taking them to a higher calling, but they discover that they are meant to be eaten.

Frank and Brenda are left behind at the store while the rest of the food is bought by Camille Toh and they discover their fate. Barry escapes while Carl dies. Meanwhile, Frank is pursued by an angry Douche for breaking his nozzle.

Frank learns the truth about the gods from Firewater and tries to prove to his friends that everything they were led to believe is a lie, but this alienates him from his friends for trying to besmirch their beliefs.

The humans can see and hear the food under the influence of bath salts. Barry kills a Druggie and returns to the store to warn Frank.

The wad of Gum and Firewater then tell Frank and his friends that they are just cartoons created by Seth Rogen. They enter a portal into the real world, presumably to kill Seth and his pals. 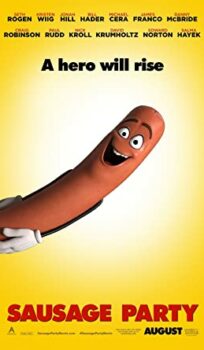