As with previous movies, this one explains two stories. One is the main story of William, a medical insurance exec going through games involving his work subordinates and the backstory of Hoffman (the new Jigsaw) and Jill (Jigsaw I’s widow).

The William story:
As William goes through the games, it is revealed that he worked on Jigsaw’s cancer case. When Jigsaw approached him with an experimental treatment, William turned him down. The games involve the janitor, who dies, William’s secretary, who lives, his lawyer, who dies, and several of his subordinates, who all die but 2. In the final room is William’s sister (the reporter) and the family of Harold (played by Justice League’s Superman George Newbern) whose case William rejected at the beginning of the movie. Harold later died on account of William’s rejection. Though Harold’s widow cannot bring herself to do it, her son exacts vengeance on the man who killed his father by throwing the switch that injects William with acid, in view of his sister, who we are led to believe survives.

The Jill/Hoffman story:
The box that was delivered to Jill contained six envelopes. Inside the six envelopes were pictures and names of several people to be involved in another of Jigsaw’s games, carried out by Hoffman after his death in III. She only gives Hoffman five of the envelopes. Jill has been in on Jigsaw’s activities since the beginning. Amanda was a patient of Jill’s, and Jigsaw made her the first example that his games work. As we know from Saw V, Hoffman set up the opening game to make it look like Strahm had done it. The police do not know where Strahm is, but believe they are closing in on him. While Hoffman is watching the games he set up for William, we are shown a flashback of William’s sister delivering a message to Jill, just before she is kidnapped by Hoffman. Hoffman is also following the investigation into one of his own games where a tape was left behind. Just as the tape identifies Hoffman as the new Jigsaw, Hoffman kills everyone in the room, uses Strahm’s severed hand to plant more fingerprints to make it look like he is still alive and guilty, then burns everything down. Hoffman returns to his observatory of the William game, but is confronted by Jill. The letter that was delivered is the letter Amanda read in part III. It told her that she needed to kill Lynn or Hoffman would tell Jigsaw that it was Amanda’s junkie boyfriend who was responsible for Jill’s miscarriage. Jill double-crosses Hoffman, straps him into the chair, and places the reverse bear trap from part I on him. She reveals that envelope 6 contained his picture, revealing that Jigsaw knew what Hoffman knew. It was Jigsaw’s motivation to choose Amanda as his first victim. Jill leaves Hoffman to die, but Hoffman manages to escape the trap, though badly scarred. 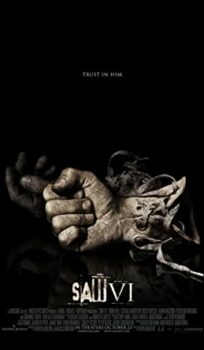