In an attempt to win Josephine (Heather Graham) back, Gilbert (Chris Klein) has a big banner made up that says “Jo, I’m not your brother. Marry me” and has it attached to the back of Dig’s (Orlando Jones) plane, intending to fly over the Mitchelson estate with Dig and show it off to Josephine since she is scheduled to wed Jack (Eddie Cibrian) there in a couple of days. Unfortunately, the “not” gets torn off during take-off, so when they pass over the estate and Josephine sees the wrecked proposal, she believes that Gilbert has mentally gone off the deep end. Sheriff Hobbs (Richard Riehle) also sees this and orders his deputies to go to the local airport and arrest Gilbert after he lands, which they do, and Gilbert is sent to a mental hospital.

On the day of the wedding, Gilbert is approached by one of Jack’s henchmen, Streak (Brent Hinkley), who is also locked up in the hospital, and he shows Gilbert that he has a pair of Josephine’s panties as well as some pictures of her naked. After Gilbert takes them from him, Streak attacks him, and the ensuing brawl results in Gilbert being locked up in a restraint room. Later on, Dig – along with the inmate Campisi (C. Ernst Harth) (having gone to his room first by accident) – breaks into the room through the ventilation ducts to free Gilbert, and as they all flee on Dig’s ATV, they cross paths with Valdine’s (Sally Field) and Walter’s (Richard Jenkins) real son Leon (Jack Plotnick) when he drives past them in his car. Gilbert has Dig tail him until he stops at the motel where he is staying, and Gilbert tells Dig that he needs to bring Josephine down here before she weds Jack in a few hours so he can show Leon to her and officially prove that they aren’t related. Dig lets him take the ATV so he can get back to Beaver while he stays behind with Campisi to keep Leon from going anywhere.

However, Gilbert gets stopped along the way by a herd of cattle standing in the middle of the road, and when he tries to get them to move along, he accidentally shoves his hand into one of the cows’ butts and gets stuck, and he gets dragged along when the herd moves straight into town. As Gilbert gets laughed at by the townsfolk, Josephine sees him and approaches him, and he manages to get his hand free and tells her that he found Leon. Believing that Leon is just an imaginary friend of his (a lie planted in her head by Valdine) and that he is truly crazy, Josephine tells Gilbert that she wants nothing more to do with him, and her decision is reinforced when she spots the panties and the pictures that he still has in his possession. Meanwhile, Dig confronts Leon and tells him that he is going nowhere until Gilbert gets back, but Leon easily overpowers him and takes off in his car.

While Gilbert is trying to hitch a ride away from Beaver, he gets confronted by a gun-toting Streak, who is now driving his truck. He takes back the panties and pictures, but he also takes the wedding ring Gilbert had planned to give to Josephine, then knocks Gilbert out and sends him down an embankment before driving away. As Streak continues along the road, Leon drives up behind the truck, and thinking that Gilbert is behind the wheel, he decides to render the truck inoperable in order to prevent Gilbert from sabotaging the wedding. He speeds up to the truck and rams it, causing gas to start leaking heavily, and when he rams it a second time, the truck explodes, and Streak is incinerated. Meanwhile, Josephine marries Jack, and Valdine pulls the cord on Walter’s speech device when he attempts to object to it, having now become guilt-ridden over helping Valdine and Jack with manipulating Josephine into this marriage. Valdine also chains his wheelchair to a sofa inside Jack’s mansion during the reception in order to keep him away from Josephine.

Sheriff Hobbs and his deputies show up at the reception, and Hobbs tells Josephine that Gilbert died after his truck exploded in an accident and his body was burned beyond recognition. He gives her the wedding ring, which survived the blast, and he also hands her his thermos, which he filled with whatever ashes that he could collect from “Gilbert’s” remains. Josephine draws the conclusion that Gilbert killed himself over losing her, but Hobbs informs her that that isn’t the case, and then he has a cuffed Leon brought out of one of the cruisers so he can show her who was responsible for his death. Josephine’s curiosity is stirred when Valdine calls Leon by his name without thinking, and then Leon addresses Valdine as his mother and tells her that he was just following Gilbert and didn’t mean to destroy his truck. Walter then appears, having willed himself out of his wheelchair, and he tells Josephine that Leon is her real brother and that he and Valdine hid this from her because they – mainly Valdine – wanted a crack at Jack’s fortune. He also informs her that Jack had set up the whole lie about Gilbert being her brother, having mailed false information about him to the private detective Vic Vetter (Brent Briscoe). Josephine slaps Jack and calls him a sick individual, then essentially tells him that they are finished before walking away from him. Valdine furiously attacks Leon, blaming him for ruining her chance at a life of luxury, but her assault is halted when she suddenly suffers a stroke.

Gilbert regains consciousness the next morning and walks to Dig’s shack, and the surprised Dig shows him a newspaper article talking about “his” demise. Gilbert decides to return to Shelbyville, thinking that it would be better to let Josephine believe that he is dead so she can get on with her life here, and Dig flies him back home. Josephine is shown driving into Shelbyville some days later, having had her marriage annulled, and she has the thermos as well as a revolver resting on the passenger seat. She is then seen standing up on the roof of the animal control center, but we only see her with the gun in her hand, giving off the impression that she is planning to kill herself over losing Gilbert. As this happens, Gilbert – having gotten his job back at the center – returns from an outing with Larry (John Rothman), and he sees her up on the roof pointing the revolver near her head. As he rushes up the fire escape to stop her, he hears the gun go off, and then he gets showered with the ashes. Josephine sees him, and he quickly climbs onto the roof and kisses her, after which she explains that she was just doing a one-gun salute to him (like how he did for dogs that had to be put down).

Sometime later, Gilbert and Josephine tie the knot. We see that Walter has fully recovered from his stroke, and Valdine has survived hers, but she is now the one confined to a wheelchair and talking through a speech device. Vic Vetter then appears and talks to the newlyweds, and he tells Gilbert that he found his real mother this time and he has various pieces of evidence to back it up. He brings them over to a limousine parked nearby, and out of it steps Suzanne Somers (herself), and she and Gilbert happily embrace each other. However, Gilbert’s joy turns to horror after Josephine quietly reminds him that he used to masturbate to this woman. 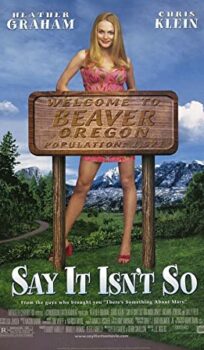