SHORT VERSION:
The murderer is a Syngenor (short for Synthesized Genetic Organism), a deadly genetically-engineered lifeform created by the late Dr. Amberdine that feeds on human spinal fluid and can reproduce asexually. Sherry, Amberdine’s former assistant, enlightens Ted and Lou to the creature’s existence after Jennifer is attacked by it at Amberdine’s lab and put into a coma when she attempted to meet Sherry there to discuss what she knew about who was doing all of the killings.

While Sherry looks over Amberdine’s notes at the lab about the Syngenor, Ted searches for a center point to the attacks in his office and realizes that it is the lab itself, so he goes there and leaves a note for Lou – who is absent at the time – telling him where he went. He finds Sherry there as she is running in fright from a dying victim she encountered, and they return to the victim and learn from him that the creature is in the sewer. They go down there and find its nest, but as Ted starts shooting its eggs, the creature suddenly appears.

Ted and Sherry lead it on a chase up to a metal works factory, and there, they concoct a plan to lure the creature into a drop forge to crush it. Despite some difficulty, they achieve this after getting an assist from Lou, who followed their trail there. Jennifer then wakes up from her coma.

LONG VERSION:
While Ted (John Stinson), Jennifer (Diana Davidson), and Lou (David Moses) are checking out the scene of the latest attack by the mysterious killer, Jennifer tells Ted that she plans to talk to a woman standing nearby who says that she has some information but didn’t want to go to the police with it. Jennifer later goes to the Amberdine Research Facility to meet the woman, Sherry (Toni Jannotta), but she is attacked by the mystery killer there before Sherry arrives and gets put into a coma. Sherry finds her later and gets her to the hospital, and Lou delivers the news about Jennifer’s condition to Ted and how she may have a brain tumor.

Sherry visits Ted and Lou in Ted’s office the following night and gives them a backstory about what probably was responsible for Jennifer’s condition: She was a biology major in college, and she accepted a job with Dr. Amberdine at his facility after graduation. He was an expert in genetic engineering who was secretly working on a new lifeform, and he succeeded in making one that was not only resilient and intelligent, but also very deadly, especially if it reached full maturity. He had been planning on killing it before it reached that point, but he died of a heart attack before he got the chance. The creature escaped after that, and it was assumed that it ended up crawling away somewhere and died, but the string of murders and Jennifer’s attack suggest otherwise. She says that the creature feeds on spinal fluid, and the victims are made to look like they suffered from an epileptic fit or brain tumor. She didn’t come forward with this information sooner because she wasn’t entirely sure that the creature was responsible, and she didn’t know what the creature looked like since she only saw it once in its embryonic stage. Ted has Lou go down to the coroner’s office to check into the victims’ reports, and after Sherry tells him that she made copies of Amberdine’s experiment notes before the people who financed the project took the originals away, he has her go down to the lab to find them while he finds a center point to the attacks.

Lou later calls up Ted and tells him that Sherry is correct about the creature consuming spinal fluid, but also says that his superiors have closed the case and concocted up a story about the murder suspect dying in a police shootout, suggesting that they are covering something up. He promises Ted that he’ll come back to assist him in figuring out the whole mess after getting a few things from the department. Ted then figures out that the center of the attacks is Amberdine’s lab and grabs his gun and heads down there, leaving a note for Lou saying where he is going. Sherry reads Amberdine’s notes, which speaks of the creature and of the growing deadly capabilities it has, and she learns that it is called a “Syngenor” (short for Synthesized Genetic Organism) and that it is about to reproduce asexually. She then hears an odd noise somewhere in the lab and goes looking for the source of it, and upon opening a door discovers a sewer maintenance worker dying from an earlier attack by the Syngenor. She runs and bumps into an arriving Ted, and after showing him the worker, the worker tells them before expiring that the creature is in the sewer.

Ted and Sherry head down into it and start looking around, and eventually come across the creature’s nest, where there are several dead or dying victims as well as the creature’s egg pods. As Ted starts shooting the pods, the Syngenor shows up. Ted and Sherry run and manage to find a way out of the sewers and into a metal works factory. While trying to find an escape route, the Syngenor gets inside and starts hunting for them. Ted eventually spots a drop forge, so he raises the top of it and tells Sherry that he is going to lure the Syngenor into the forge’s bed and then she must hit the button to bring it down and crush the creature. Sherry soon finds a note saying that the stroke motor is overheating and that the control box cannot be left on for more than a minute without operating or the breakers will blow, so she yells this information out to Ted. Ted remedies this problem by finding and turning on the main power switch, but then the Syngenor shows itself near him. Ted runs over to the forge, but the Syngenor trips him and grabs hold of him. Before it can harm him, Lou – having followed Ted’s trail to the factory – timely arrives with a shotgun, and he blasts the Syngenor into the forge. Sherry turns it on and squashes the creature flat.

A short time later, Jennifer wakes up from her coma after having a nightmare about the Syngenor. 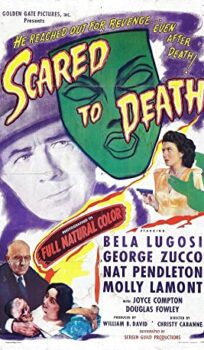