By the end of World War II, Oskar Schindler (Liam Neeson) has saved more than 1100 Jews from certain death. But, he is a criminal, because he is a Nazi Party member, a munitions manufacturer, and a profiteer of slave labor. He flees for elsewhere at 12:05 a.m. on May 8, 1945, the day after the war ends, but not before being given a letter signed by every worker telling anyone who caught him that he was not a criminal, and a gold ring with a Talmudic inscription that says “Whoever saves one life, saves the world entire.”

A Soviet soldier comes hours later in the daytime and liberates Schindler’s workers. The narratives state that Amon Goeth (Ralph Fiennes) was hung in Krakow for crimes against humanity on September 13, 1946, and that Schindler failed at his marriage and several businesses after the war. However, the Yad Vashem in Jerusalem would declare him a righteous person and invited him to plant a tree in the Avenue of the Righteous. Schindler would be buried at the Christian Cemetery in Mount Zion in Jerusalem after his death on October 9, 1974 at age 66.

The last scene shows the real surviving Schindler Jews along with the actors who played them in the film paying tribute to Schindler at his grave. 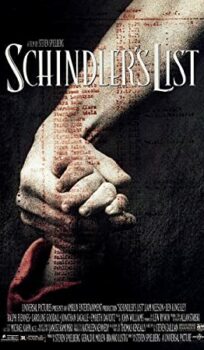