Famous British journalist Joe Strombel (Ian McShane) has recently died and is on the Grim Reaper’s boat to the afterlife when another passenger gives him a great scoop about the Tarot Card Killer who has been terrorizing London. This passenger was Peter Lyman’s (Hugh Jackman) assistant and she thinks that she was poisoned by him.

Strombel jumps off the Grim Reaper’s ship to find a reporter to give this scoop to.

Magician Sid Waterman (Woody Allen) meets Sondra Pransky (Scarlett Johansson), a college journalist visiting London, when she volunteers on stage during his magic show. The ghost of Strombel appears inside Sid’s trick box and tells Sondra about Lyman. Later, Sondra tells Sid what happened and Strobel appears again and gives the two of them more clues.

Sondra and Sid meet Lyman and Lyman falls for Sondra. Sid poses as her father and they look for evidence at every opportunity. He finds tarot cards and they catch Lyman lying about where he was when the latest prostitute was killed, but he has good explanations for both.

Later, when Sid finds a key that fits the murder victim’s apartment door, he rushes to the Lyman estate to save Sondra but crashes his little Smart Car and dies on the way.

Lyman reveals that her suspicions about him were correct. The latest victim was the prostitute that Lyman was seeing, who had threatened to reveal the aspiring politician as a client. Lyman had used the methods of the Tarot Card Killer to keep suspicion away from him.

Lyman pushes her out of the rowboat to drown. Sondra had faked being a bad swimmer earlier (that’s how she met him) and shows up alive and wet as Lyman is reporting her boating accident.

Sondra gets her scoop, credits the dead journalist Strombel and friend, Sid.

At the end, on the Grim Reaper boat we see Sid is entertaining folks with his card tricks. 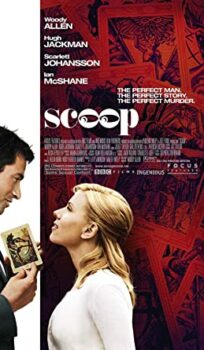