Scouts Guide to the Zombie Apocalypse(2015)

Pooper:
The three scouts and Sarah save most of the high school seniors and kill a majority of the zombies (except for scout leader Rogers, the most resilient zombie of them all).

Long Ending:
The film opens with a janitor (Blake Anderson cameo) cleaning up a test area for a secret lab corporation. The janitor comes across a dead body hooked up to various machines. After messing around with the body, it arises and eats the janitor. The zombified janitor then bites the head scientist and the zombies make their way into the nearby woods.

Meanwhile, the local boy scout troop led by Dolly Parton-loving scout leader Rogers (David Koechner) is trying to recruit new members with no success. The troop consists of only three boys, Ben (Tye Sheridan), Carter (Logan Miller) and Augie (Joey Morgan). Carter thinks being a scout is stopping him from being popular, and he and Ben are planning to quit. The pair agree that they will quit after the upcoming campout where Augie will receive the Condor Badge, the highest honor in scouts. Ben is in love with Carter’s sister, but too afraid to act on his feelings. Carter’s sister is a senior and dating a douchey guy. The douchey boyfriend invites Carter and Ben to the secret Senior party that is the same night as the campout. Carter gets Ben to agree to sneak out with him after Augie and scout leader Rogers go to sleep to attend the party.

The boys meet in the woods and scout leader Rogers never shows up (he is attacked and bitten earlier in the film by the zombified scientist). Ben and Carter sneak off when  they think Augie is asleep, only to be confronted by him when they reach their car. The kids argue, with Carter telling Augie that he and Ben are quitting scouts and Augie going off on his own. As they drive to the party, Ben and Carter realize that the town is empty. Carter notices the bouncer is not standing guard outside the local strip club and convinces Ben to go in with him. Once inside, they are attacked by a stripper zombie and the bouncer zombie and saved by gun-toting cocktail waitress Denise (Sarah Dumont). Meanwhile, Augie goes to scout leader Rogers’ home and is attacked by the zombified scout leader. He sets Rogers on fire and then ties him to a chair before leaving to find help.

Sarah, Ben and Carter go to the local police station to discover the town has been evacuated. They are then attacked by a horde of zombies, but eventually rescued by Augie. The four meet a military guy and think they are rescued, but he has been bitten by a zombie and is killed by Denise. Over the military guy’s radio, they hear the town is to be bombed in two hours. They realize that the senior class is likely unaware of the apocalypse (as the party is in a secret location outside of town) and has likely not been evacuated. They arrive at the location given to them by Carter’s sister’s boyfriend, finding it to be a sewage plant (the joke was that the boyfriend was full of shit about inviting Carter and Ben to the party).

The group goes to Carter’s house as he guesses that the party’s location has been written in his sister’s diary. Ben and Denise bond, with her telling Ben to be more assertive (and of course, has him practice kissing with her). While there, the foursome are attacked by many zombies (including Carter’s neighbor (Cloris Leachman cameo) and her zombified cats) including a really disgusting and hilarious gag involving a male zombie’s privates. They also encounter a freed scout leader Rogers and run him down with their car. They get the real location of the party from diary. Denise drives off to alert the military as to the location and existence of the party as Ben, Carter and Augie go to a local hardware store and use their scouting knowledge to build a bunch of zombie-killing weapons. The three also renew their friendship and come to terms with their years of scouting.

The scouts arrive at the party just as the zombies attack. Ben gets to kill Carter’s sister’s douchey zombified boyfriend and they succeed in evacuating most of the party guests. The three scouts get trapped in the building and believe they will need to sacrifice their lives to kill the zombies via a homemade bomb Augie built. As the fuse is lit, Denise shows up through a hidden exhaust pipe and she and the boys escape through it just as the bomb detonates, killing all the zombies. They think it’s over when suddenly, scout leader Rogers shows up and shambles towards them. Rogers is then blown up by a grenade as the military has arrived to finish the rescue.

At the military camp, the group of four friends celebrate their victory. Ben goes up and kisses Carter’s sister in a suave manner (Carter vows to sleep with Ben’s mother in revenge). After the credits roll, we see that scout leader Rogers’ head survived the grenade. A bird poops on the zombified head to end the film. 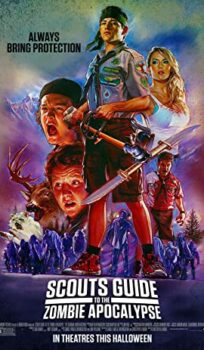