Edward (Hugh Grant) was secretly engaged at a young age to Lucy, a woman of lower social status. He refuses to back out on his offer of marriage and his family disowns him. Lucy leaves him and marries his brother, who has now inherited everything. This leaves Edward free to marry Elinor Dashwood (Emma Thompson), who he really loves, and they are given a parish by Colonel Brandon (Alan Rickman).

Marianne Dashwood (Kate Winslet) has an impetuous romance with Willoughby but when he is cast out of his family for having an illegitimate child, he quickly marries an heiress (abandoning the mother, who is the daughter of Colonel Brandon’s childhood love). Marianne falls ill and during her recovery comes to know Colonel Brandon who has long loved her. They marry in a double wedding with Elinor and Edward. 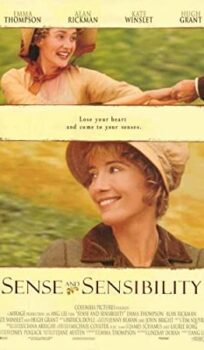