Submitted by Mark S (Pooper) and Evan B (Long Version)

POOPER:
Gordon “Gordo” Fleming (Peter Mullan) murdered his family after getting the job of clearing the asbestos from the Danvers Mental Hospital. He kills his asbestos cleaning crew and ends up alone in Mary Hobson’s (the patient who’s 9 psychiatric sessions make up the title) hospital room, surrounded by pictures of his wife and friends. Was he possessed by the ‘demon’ Simon or did he snap? You have to decide that point.

LONG VERSION:
Gordon Fleming (Peter Mullan) runs an asbestos cleaning company. He and his wife have just had a baby and Gordon is under incredible financial stress as his company is about to go out of business. He manages to win a government contract to rehabilitate an abandoned (and real-life) insane asylum, the Danvers State Hospital. If they can finish the work in one-week, they will get a big bonus. He brings in a crew consisting of the attorney general’s son Mike (Stephen Gevedon) who left law school to work in this business, his right-hand man Phil (David Caruso), a scumbag named Hank (Josh Lucas) who stole Phil’s girlfriend, and his nephew Jeff (Brendan Sexton III) who is deathly afraid of the dark.

Gordon soon shows up to work with an unexplained leg wound and begins acting paranoid. Phil becomes concerned that Gordon, usually calm and good-natured, is starting to crack from the pressure of keeping his business afloat. Hank tells Jeff that all of them have an exit-strategy from this line of work except for Gordon. Mike finds a box of nine recorded therapy sessions with a patient named Mary Hobbes and begins obsessively listening to them. In the sessions, the therapist is trying to unearth a dark secret in Mary’s past. Mary has several multiple personas – that of innocent “Princess” who “lives in Mary’s mouth” (meaning she talks the most), good-natured “Billy” who “lives in Mary’s eyes” so he can take everything in and protect Mary from suffering further trauma, and the mysterious “Simon” who the therapist is desperately trying to get to come out.

One day, Hank finds a bunch of silver coins and gold teeth while rummaging through the incinerator the asylum used to cremate the bodies of dead patients (he also finds a pick used to give patients lobotomies). Hank returns that night to steal all the silver and gold and leave town. He is accosted by a figure cloaked in shadows and does not return to work the next morning.

Gordon confides to Phil that he hasn’t been staying at home because he hit his wife. He says that he went home to celebrate getting the contract and accidentally knocked a pot of boiling water on his leg (explaining his injury) and, combined with the dog barking and baby crying, slapped his wife. Gordon does not confide in Phil that he has also been hearing a voice talk to him at work. Phil talks to Mike and says they need to step up their work to get the job done quickly and hire a worker named McManus (Larry Fessenden) to replace Hank.

That day, Jeff finds Hank wandering around the asylum wearing glasses (earlier, Mike explained that because lobotomies occurred by stabbing a pick through the patient’s eye sockets, lobotomy patients would need to wear sunglasses until the eye swelling went down). He convinces the crew to help him look for Hank (who had wandered off when Jeff went to tell the others), but Mike sneaks away to listen to the last tape of Mary’s therapy – Session 9. In the tape, the therapist manages to get “Simon” to emerge and talk to him. The viewer realizes the voice of Simon is the same one that has been talking to Gordon in the present day. Simon explains that when Mary was a little girl, her brother played a trick on her that caused Mary to fall down and injure herself on a glass doll that shattered during the fall. At that point, Simon emerged to “protect” Mary, which he did by taking the glass shards and stabbing Mary’s family to death. Simon also explains that while Mary blames him for the murders, Simon never does anything that his host doesn’t want to happen. The power then goes out before the tape is finished and Mike runs out to restart the generator.

We jump to the next day when McManus arrives for work and finds everyone but Gordon dead. He is quickly assaulted and stabbed to death with the lobotomy pick by… Gordon.

We flashback to learn that Simon had manifested in Gordon’s body and see how everyone died. The night Hank came to collect the found valuables, he was attacked by a “sleepwalking” Gordon (really Simon was in control) and was lobotomized by him. It is also shown that Hank died when Gordon removed the pick from his eye socket to stab McManus. After Phil finds Hank, he runs to find Gordon sitting in Mary’s old asylum room where Gordon has taped up pictures of his family. Gordon attacks and bludgeons Phil to death. Gordon then waits for Mike to come back from re-starting the generator and bludgeons him to death too. Gordon then goes outside where Jeff is in the van (Jeff fled the asylum when the generator went out due to his fear of the dark) and stabs him to death. We then learn that Gordon actually snapped much earlier, killing his wife, child, and dog the day the boiling water spilled on him.

The film ends with Gordon crying in Mary’s room and begging forgiveness from the photos of his crew and family. We then hear the end of the Session 9 tape where the doctor asks Simon where he resides. Simon responds that he resides in the bodies of the sad and weak-willed (thus why he was able to manifest within Mary and later, Gordon). 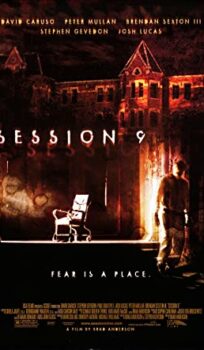