Longer version:
Will Smith is an MIT graduate who builds rocketships. One night he gets into an accident while driving with his wife. The accident occurred because he was texting on his blackberry instead of watching the road. He kills his wife and a busload of people; 7 in total.

To make up for his extreme guilt, he decides to kill himself and donate his organs to “good people.” He enlists the aid of a childhood friend to help carry out his wishes after his death.

He finds Holly, a social worker, and gives her part of his liver. At his request, Holly then gives him the name of a mother with 2 kids who is being beaten up by her boyfriend. He talks to her and eventually she accepts his offer and moves into the beach house he used to share with his wife.

Will also finds Ezra, a blind, vegan, telemarketing meat seller. First he insults Ezra to see if he is easily angered then he follows him to a cafe to see his interactions with people.

In addition, Will donates a kidney to an older man who gets businesses to donate money to worthy causes and he donates bone marrow to a young child.

Then he meets Emily who has congenital heart failure. He befriends her and they fall in love. His brother finds out that Will Smith is impersonating him and confronts him. After making love to Emily, Will talks to her doctor and confirms that because Emily is a rare blood type, her chance of getting a donor is 3-5 percent. Apparently Will and Emily share the same blood type.

Will then goes back to his motel, calls 911, leaves them written instructions, and then climbs into the bathtub and uses a deadly poisonous jellyfish (that he had been keeping for this purpose) to kill himself. Ezra gets his eyes and Emily gets his heart. 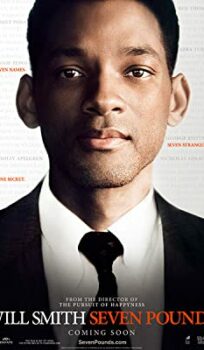