Pooper:
Mei’s sexual escapades leave him near death, and he is then made an outcast after he shames his wife into killing herself. Mei returns to the monastery, telling the monk he was right that being promiscuous built bad karma, and devotes himself to religion.

Long Ending:
On the eve of his wedding, Mei Yeung-Sheng (Lawrence Ng) visits a Buddhist Monk at a monastery where they debate the virtues of monogamy. Despite the Monk’s warnings that committing adultery and indulging in promiscuity will lead to bad karma, Mei leaves unpersuaded. He marries Huk-Yeung (Amy Yip), a wealthy daughter from a religious household. Although she initially fears sex, Mei uses a pornographic book to entice Huk-Yeung and they soon share a loving, sex-filled marriage.

Eventually, Mei leaves his home to continue his studies and pursue mistresses. He cuts off contact with Huk-Yeung despite the fact that she writes passionate letters to him often. Mei befriends a thief named Chor Kun-Lun (Lieh Lo) and asks him for help pursuing women. However, Chor mocks Mei, saying that his privates are too small to become a great womanizer. Depressed, Mei meets a mad surgeon who offers to give him a penis transplant. On a dark and stormy night, the surgeon affixes the privates of a horse onto Mei. With his manhood now legendarily sized, Chor helps him seduce women. Mei manages to woo the wife of a domestic abuser named Wong (Elvis Tsui), and when Wong confronts Mei, Wong is humiliated the townsfolk drive the brutal man out of the city and make him an outcast.

Meanwhile, Huk-Yeung gets ever more depressed as she yearns for her husband. One night, she is seduced by her family’s gardener (who turns out to be Wong, who got a job there after becoming an outcast) and becomes pregnant. She and Wong run away from her family, but Wong betrays Huk-Yeung and sells her to a brothel. It turns out that Huk-Yeung is incredibly talented and develops her sexual prowess to a point where she is deemed a sex therapist who can help men overcome their sexual inadequacies. The townsfolk embrace her as her skills lead to happier and more fulfilling marriages.

After engaging in a long period of debauchery with two kinky cousins, Mei is left on death’s door – nearly blind and mortally exhausted. His servant brings him to the legendary sex therapist, not knowing it is Mei’s wife. Huk-Yeung nurses Mei back to health, but when he regains his sight and realizes that the therapist is his wife, he shames and beats her. Huk-Yeung then commits suicide due to her husband’s rejection. The townspeople turn on Mei, beating him up and making him an outcast.

Mei returns to the monastery. He acknowledges to the monk that his lustful ways built up bad karma and that he has suffered greatly. Mei asks to dedicate himself to the Monk and forego sex. At the monastery, he also finds Wong (who is deeply regretful for what he did to Huk-Yeung) and Chor (whose hands have been cut off for his crimes). The three make amends and dedicate themselves to a more righteous path. 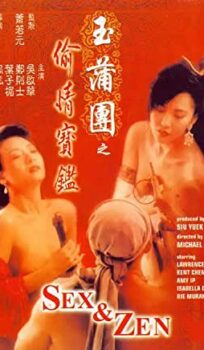