Ian (Josh Zuckerman) finally gets to meet Ms. Tasty (Katrina Bowden) in Knoxville, but cannot go through with having sex with her since he is in love with Felicia (Amanda Crew).  It doesn’t matter; Ms. Tasty is actually a con woman with a psycho boyfriend who steal the cars of her lonely marks.  They steal the GTO with Felicia unknowingly  inside.

Long story short, Ian is able to save the day, Ms. Tasty and her boyfriend are arrested, and Felicia and Ian finally admit that they love each other.

On the way back they go to the Amish farm they stopped at earlier. It is here that Lance (Clark Duke) reveals he wants to stay with Mary (Alice Grecyzn) and thus will join the Amish church to do so. He congratulates Ian for staying true to himself and winning the girl he actually wanted.

The film ends with Ian revealing that his homophobic brother Rex (James Marsden) revealed himself to be gay after years of denial during Thanksgiving, and that he finally lost his virginity to Felicia on New Years Eve.

The end credits show the wedding photos of Lance and Mary and an extra clip of Ezekiel (Seth Green) being sarcastic to Fall Out Boy. 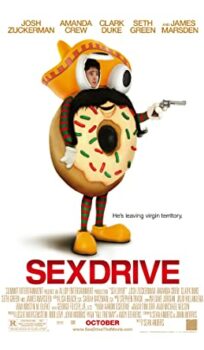