Major Thorn (Phil Hartman) has Colonel Hall (Dan Aykroyd) send Major Sergeant Bilko (Steve Martin) and his platoon on desert maneuvers near Las Vegas (though they gamble and party in Vegas instead), which allows him access to the motor pool’s files without any interference. He proceeds to frame Bilko for embezzlement by putting research funds for the experimental hover tank directly into Bilko’s private account, and then showing Hall the false evidence. Hall decides to court-martial Bilko, but Thorn convinces him that it would be better if Bilko were just transferred to Greenland instead.

After he receives his transfer notice, Bilko panics, not wanting to be sent away but not sure how to prevent it from happening. Thankfully for him, the new recruit Holbrook (Daryl Mitchell) comes up with a plan. First, he has Bilko arrange a public demonstration of the hover tank for numerous government dignitaries and inform Hall about it, and Hall tells Bilko that he won’t be transferred if the demonstration is a success. Then, he sends two other platoon members to the Rusty Spur bar, where Thorn hangs out off-duty, and they have a scripted conversation within his earshot about how Holbrook got the tank‘s defective cannon to work by fixing the fire control and super elevator board, which operates it, and that Bilko will get to stay if the tank works at the demonstration. Thorn heads to the base and sabotages the tank by removing the board.

At the demonstration, Bilko and his platoon successfully rig it by making it look like the tank’s cannon actually works. Incensed, Thorn yells that Bilko had rigged the whole thing, and then he loudly insults both Bilko and Hall before, blinded by his hatred and anger, he produces the board he removed and confesses to sabotaging the tank. He is sent back to Greenland as punishment, and Bilko remains chief of the motor pool.

However, Bilko’s troubles aren’t over: His 30-day deadline to win Rita (Glenne Headly) back is almost up. At the last moment, he assembles his platoon outside her house and has them sing his and Rita’s song “Only You”, and a touched Rita takes him back. On their wedding day, Rita makes Bilko wait at the altar for a long time as payback for all the times he stood her up, but she eventually does show up, and they get married. 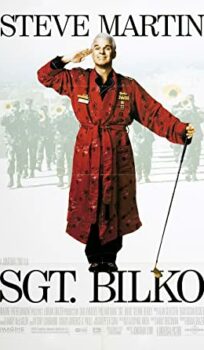