A coming of age story of four girls who go to Myrtle Beach in the summer of 1963 for one last girls getaway before they all go their separate ways after high school.

Carson – Carson (Phoebe Cates) is engaged to Harley but falls for Buzz whom she meets in Myrtle Beach.  They go “all the way”.  Carson breaks off her engagement with Harley and chooses Buzz to be with.

Melaina – Melaina (Bridget Fonda) impresses Bobby Valentine’s Hollywood manager and it is assumed she goes off to California to become a big star.

Luanne – Luanne comforts Harley while he has mixed feelings about marrying Carson.  The two share a kiss and when Carson breaks up with him, Luanne and he become an item.

Pudge (aka Caroline) – Pudge (Anabeth Gish) and Chip win the Shag dancing contest.  They also fall in love and it is Pudge’s first relationship.  Even though Chip is joining the Marines weeks later, the two promise to write to each other. 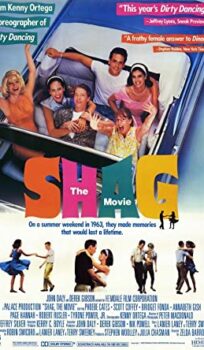