Long Ending:
Brandon Sullivan (Michael Fassbender) is a successful account manager at a huge firm, and a sex addict (and, a caffeine addict as well). He attempts to seduce a married woman that he sees on a subway, pays for prostitutes, constantly watches porn online at home and work, and has sex with women in back alleys. He comes home one day to find his sister Sissy (Carey Mulligan) has temporarily moved in. It becomes quickly apparent that the two have an unhealthy relationship. She is emotionally needy – constantly telling every man she meets that she loves them. Brandon is clearly uncomfortable with his sister, and becomes more stressed out when Sissy not only sleeps with his married boss, but constantly calls his boss afterwards. She also climbs into his bed at night, asking to be hugged, and hangs out with him in various forms of undress.   Sissy is a very talented singer, who brings Brandon to tears with her voice, although he will never praise her talent.

Things soon begin to unravel for Brandon. His advances on women become less suave and more desparate. Although his employer discovers that his hard drive at work is chock-full of porn, it is blamed on a virus or prank. He goes on several dates with a co-worker named Marianne (Nicole Beharie), but when they begin to get intimate, Brandon is unable to perform. In a fit of self-loathing rage, he kicks Marianne out of his hotel room and hires a prostitute to engage in rough sex with him. Brandon also becomes embarassed when Sissy discovers  his pronographic materials. As a resuly, Brandon throws away his sizable stash of pornography as well as his personal computer.

Brandon is mortified and calls an ambulance. He shows true remorse and stays by her bedside until she recovers. It appears that Brandon is actually trying to change his ways and bring his addiction under control despite his disastrous attempt to do so the first time. The film ends with Brandon on the subway where he sees the married woman he attempted to seduce at the beginning. She recognizes Brandon and purposefully flirts with him, and the movie ends without us knowing whether Brandon will maintain his resolve, or succumb to his destructive nature. 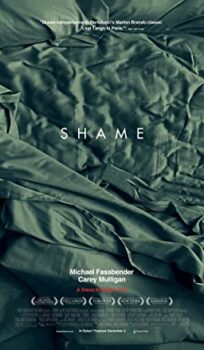