Short pooper:
Shota (Kairi Jo) gets caught and, as the authorities intervene, the family’s illegal situation is discovered, publicly exposed and they’re all broken apart. Nobuyo (Sakura Ando) goes to jail, Shota becomes a ward of the state and little Yuri (Miyo Sasaki) is returned to her parents, just to end up as neglected as she was in the beginning.

Longer version:
After the death of Grandma Hatsue (Kirin Kiki), young Shota starts feeling increasingly uneasy about his and his family’s living situation -especially after Osamu (Lily Franky) snatches a purse from a locked car, which went against their code of “not stealing anything that already belonged to someone else-. Matters come to a head when, one day, while at a store, Shota spots Yuri trying to shoplift something and, not wanting her to follow that path, exposes himself by grabbing something and running off. When he finds himself cornered by two store employees, he jumps off an overpass, breaking a leg and landing himself in the hospital.

The authorities intervene and, upon digging, they eventually catch Osamu and Nobuyo as they try to run away with Yuri and Aki (Mayu Matsuoka) -who, all this time, didn’t know she was actually the daughter of that son of Grandma Hatsue from which the latter would obtain money monthly, and finds out about it during interrogation-. Shota also gets told that his real name isn’t even Shota; also, that he was found by Osamu and Nobuyo, many years ago, inside a locked car, and that Osamu was planning to leave him behind. Moreover, the couple are being accused of kidnapping -from which they defend themselves, alluding they never asked for a ransom and actually cared for little Yuri- and “disposing of the body of Grandma” -to which Nobuyo retorts the woman was just buried under the house upon dying-. Nobuyo also corroborates that her first abusive husband was killed by her and Nobuyo in self-defense.

Ultimately, Nobuyo takes the fall for everything and goes to prison. Yuri gets returned to her parents, who still don’t care about her -we even get to see how self-absorbed and condescending the girl’s real mother is-. Shota is placed in a shared house. Osamu moves into a new, smaller place by himself and Shota still wants to spend time with him. However, feeling the boy deserves better, Osamu tries to fend him off by admitting he indeed wanted to abandon him when the trouble started for them all and that “he can no longer be his father”.

The next day, as they part ways, Shota admits he let himself get caught. The boy boards a bus and, as Osamu tearfully chases after it, Shota mouths “Bye, DAD”. The movie ends with Yuri playing by herself in the cold, outside the balcony of her home, while looking through the slats, just as she was when Osamu and Shota found her. 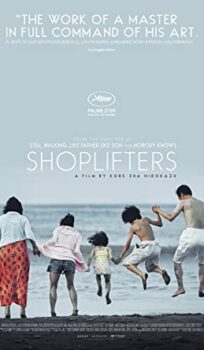 Go Tell It on the Mountain