Oscar is the leader of the two goons and is behind the bank heist. Since they cannot dig to the safe, Oscar talks Johnny into doing it for him under the pretense that he is digging a tunnel to a safe room for Ben and Fred.

Johnny realizes he has been played for a sap again when he sees that Oscar wanted him to open the box containing the Van de Veer collection (a collection of precious stones worth over $47 million). After Oscar runs out to meet the goons, Johnny follows attempting to reason with him. They try to run Johnny down with the car, but end up chasing him to a secluded street, where they wreck Johnny and almost demolish him completely before he uses his remote to call over some remote control airplanes that injure the goons.

Fred, Ben, and Sandy arrive at the building and are ambushed by police, who take Ben and Sandy into custody, but Fred manages to slip away. Fred eventually finds Johnny outside a Radio Shack, where Johnny walks him through repairing him. But his backup power is dying, and if his memory is lost, he will die. When Fred is explaining human nature to Johnny, he gets enraged and goes out to find Oscar and the goons. As Ben and Sandy are being booked, an officer who arrested Johnny earlier in the movie recognizes him and corroborates his story. They follow the leads of a robot fighting two men in a junkyard. Johnny manages to incapacitate the two goons while Fred holds Oscar at bay. Just as Johnny finishes the job with one of them, Oscar punches Fred and gets away. Johnny chases Oscar to the pier, and manages to grab Oscar from a line (in the process we see a building in the background that clearly gives away the shooting location as Vancouver, not LA where the movie supposedly takes place).

The authorities chase them down to where they land. Oscar gives himself up willingly as Johnny lies dying. Ben rushes over with a defibrillator and manages to shock Johnny back into consciousness. The next scene shows that Johnny has helped Fred and Ben create a major corporation, and Fred accompanies Sandy to the naturalization oath, where Ben and Johnny are granted US citizenship. 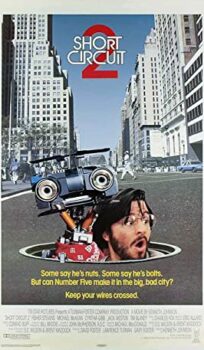